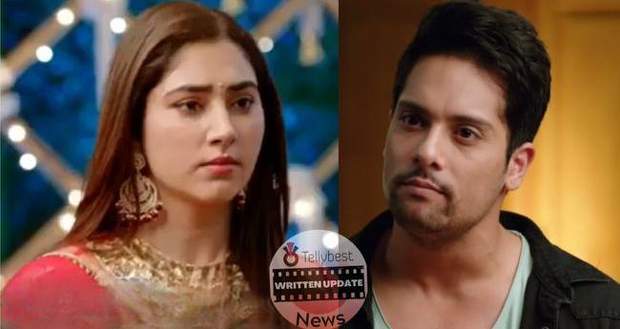 Meanwhile, Ram comes to meet Adi, Vikrant, & Brinda in his office and says he wants to talk to Eshan alone.

Ram feels Priya is hiding something and doesn't want him to talk to Eshan alone.

To solve Ram's problem, Brinda asks Sarah to send Eshan to resolve her laptop issues so Ram can talk to him.

Meanwhile, Priya & Pihu arrive at the school and an evil Nandini greets them.

On the other hand, Ishaan waits to meet Brinda but Ram comes to see him.

Ram then sits on the sofa with Eshan and asks for genuine help.

Meanwhile, Nandini points toward a school board and a curious Pihu goes to see what is stuck on it.

Unfortunately, Priya's photographs, when she was inside the jail, are put by Nandini.

The school's principal comes and shames Priya for hiding the information about her going to jail.

At Brinda's house, Ram finally asks Ishaan why he ran away on the day of Janmashtami and how Priya knew he would be at the police station.

Ishaan lies but Ram asks him to trust him fully and spell out the truth.

Eshan's eyes fill with tears as he repeatedly tells Ram he cannot tell him the truth.

Ram then tells Ishaan he is going away forever, making Eshan drop to his knees to stop a desperate Ram.

Ishaan cries while Ram gets angry at him to drop his hand.

On the other hand, Pihu cries & pushes the principal who labels Priya a criminal.

The principal scolds Nandini for Pihu's behavior and says she can't give her admission.

Priya cries, unable to say anything while Pihu wails, asking Priya to shut up the principal.

However, Priya finally tells Pihu that she was in jail for two years.

Ram stares at Ishaan shockingly as his world crumbles while Eshan reveals Priya took all the blame for something Ishaan didn't intentionally do.

Past haunts Ram's memory as he remembers screaming at Priya after Shivina's death.

Ishaan apologizes over and over again while Ram hugs a hurting Ishaan in his arms.

Ishaan then asks Ram for a promise to always have Priya and Pihu's back.

At school, Priya apologizes for lying to Pihu while Nandini states that Priya pushed Shivina to death and tries to manipulate Pihu's innocent mind.

On the other hand, a shell-shocked Ram drives to Pihu's school to comfort Priya who did the biggest sacrifice without telling anyone about it.

© Copyright tellybest.com, 2022, 2023. All Rights Reserved. Unauthorized use and/or duplication of any material from tellybest.com without written permission is strictly prohibited.
Cached Saved on: Monday 21st of November 2022 08:52:45 PMCached Disp on: Friday 9th of December 2022 03:43:46 AM