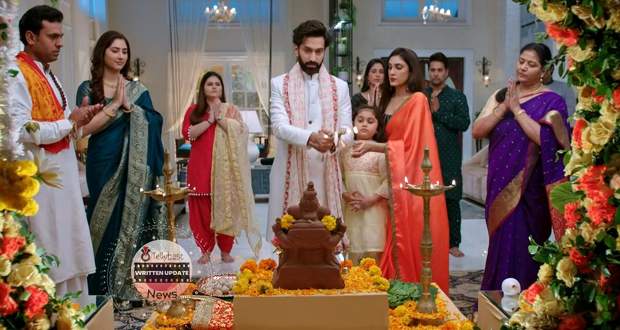 Today's Bade Ache Lagte Hain 2 13th September 2022 episode starts with the Ganesh puja commencing in the Kapoor mansion with Ram, Pihu, Priya, and all others present there.

Vedika tries to come closer to Ram for the arti but Pihu blocks her by joining Ram in doing the arti.

Ram tells Vedika that he wants to do the arti with Pihu which makes Vedika step back and stand alone.

However, Pihu cleverly pulls Priya with her to do the arti with Ram and the three of them continue the puja together.

After the arti gets over, the priest lights up the camphor and Ram asks Pihu to take blessings from the flames.

Priya stops Pihu from doing so and sends her to her room making Ram furious about the matter.

As Priya tells Ram that Pihu has an allergy to camphor, Ram realizes that he is unaware of so many things regarding Pihu.

Priya tells Ram to take her permission before deciding anything about Pihu so that something like that can be prevented beforehand.

Ram tells himself that everything is because of Priya as she had kept Pihu hidden from him for all these years.

Meanwhile, Shubham intentionally shows Sandy the card of the custody lawyer and acts as if it was a mistake.

Sandy googles the name and gets shocked to see Ram receiving that card from Shubham with a smile on his face.

Nandini and Vedika inform Ram that they found a lawyer’s card in the house and indicate that it belongs to Priya.

Ram gets shocked to see the custody lawyer’s card and gets the notion that Priya is trying to file Pihu’s custody for herself.

Later, Priya denies Pihu from playing with Ram and asks her to study as Ram is planning to send her to one of the best schools in India.

Just then, Ram comes there to take Pihu for their date but Pihu denies him because of Priya’s commands.

Ram sarcastically asks Priya for her permission so that he can take Pihu on a date with him, making Priya feel guilty.

After Ram decides to let Pihu study, he comes down and helps Priya in inflating a bathing pool tube for Pihu.

Priya asks Ram about how they should plan to tell Pihu about him being her father so that Pihu does not get confused.

Hearing Priya, Ram clears his thoughts about custody and tells her that he will manage everything by her side.

Priya suggests that they should tell Pihu about the truth in front of all their friends and relatives so that Pihu gets introduced to everyone.

Ram agrees to that and tells Priya that he does not want Pihu to go to Dehradun for her studies, to which Priya gladly agrees.

© Copyright tellybest.com, 2020, 2021. All Rights Reserved. Unauthorized use and/or duplication of any material from tellybest.com without written permission is strictly prohibited.
Cached Saved on: Saturday 1st of October 2022 11:56:37 PMCached Disp on: Thursday 6th of October 2022 05:01:09 PM