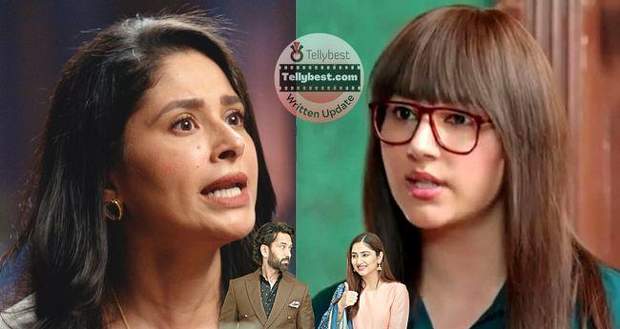 Sid returns the big grin and tells Shubham that he needs to be in the good books of Ram so Nandini and Vedika gets affected by his wrath, not him.

Sid makes it clear that if both of them want to proceed further in the business, they need Ram's support.

Meanwhile, Ram brings Lovely to a boutique to change her hairstyle and dress, joking that even if he needs to sell all his property to change her look, he will do that.

Lovely looks irritated while the hairdresser comes and greets Ram.

Ram awkwardly stutters that he needs to see Lovely's look changed into a prettier version even though she is still Lovely.

Just then, Priya gets a flashback of when she puked due to eating stale paneer and Ram thought she was pregnant.

She remembers how sad he seemed when she told him she wasn't pregnant and he revealed that he wanted to pamper her.

Ram then made Priya sit on the stool and curled her hair after giving Priya a head massage, making her feel butterflies in her stomach.

The flashback ends as Priya stares at herself in front of the mirror and Ram argues with the hairdresser.

He asks her to step aside because he thinks he can do a better job than her.

Ram makes a hassle at the hairdressing table as he grabs all the hair-styling appliances.

When he cuts a portion of Lovely's bangs, he does a happy dance while Priya removes the rest of it quickly.

After finally curling her hair elegantly, Ram whispers that no one can her look beautiful like this and Priya gets goosebumps.

He then chooses a red Kurta for her to wear and when Lovely wears it, Ram's breath hitches.

Tying a necklace around Lovely's neck, Ram urges her to accept this small token of gift, otherwise, he would personally call Pihu and ask her to call Lovely, Ms. Khadoos instead.

Priya internally says that Ram is pampering her just like he wanted to even without knowing she is pregnant while Ram asks Lovely to come to his farmhouse to patch things with her husband.

At Kapoor Mansion, Nandini tells Ram that she took out Swati's photo (Ram's Mother) for her "barsi" (demise day) to honor her, and Vedika volunteers to make prasadam for the day.

However, Ram tells Vedika that he has already asked Lovely to do it since she is his PA and he doesn't need anyone's help, much to Vedika's annoyance.

After Ram leaves, Nandini begins to tell Vedika how she will make Ram agree to her conditions.

On the other hand, Vikrant and Aditya question Ram for inviting Lovely and her husband to his farmhouse when she is just a PA.

Ram replies that since she helped him with Shubham, he wants to do everything to make her happy.

Priya and Krish wait outside to be called inside by Ram.

Priya tells Krish that she never thought Ram would set her up with somebody else and smiles sadly.

After they both go inside, Krish rudely talks to Ram to create some tension purposefully and makes it clear that he and Priya can solve their issues alone.

However, Ram urges that Lovely means a lot to him while Krish questions that she exists as a PA for him, nothing else.

All of a sudden, media people barge into the farmhouse, swamping Ram with flashlights as Vedika comes along with him and bends down on one knee.

Holding a rose in her hand, Vedika reminds him how he promised to marry her in the past and proposes to him. Krish glares at Vedika while Priya gets stressed.

© Copyright tellybest.com, 2022, 2023. All Rights Reserved. Unauthorized use and/or duplication of any material from tellybest.com without written permission is strictly prohibited.
Cached Saved on: Wednesday 25th of January 2023 09:14:53 PMCached Disp on: Tuesday 31st of January 2023 06:13:38 PM