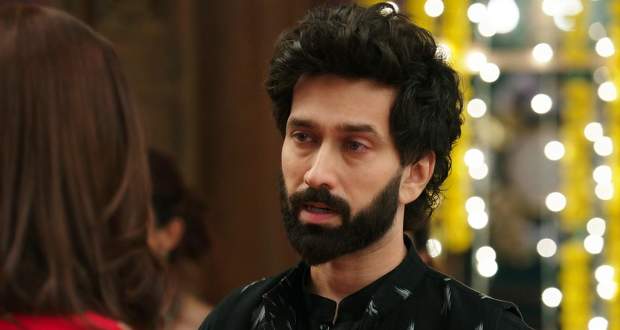 Today's Bade Ache Lagte Hain 2 14th July 2022 episode starts with Nandini going back to her room making the excuse of being low in energy due to the previous day’s stress.

Meanwhile, Ishaan asks for Sandy’s help as he plans to bribe the priest into delaying the wedding, seeing it as the opportunity to bring Ram and Priya close.

On the other hand, Nandini showers Priya with newspaper articles that tell the truth about those two years when Priya was in jail.

Priya’s face contorts in pain seeing the article clippings while Nandini blackmails her to reveal the truth to Pihu if Priya or any of her family members uttered a single word about Pihu’s truth to Ram.

Later on, everybody gathers in the living room to decide on the wedding date and discuss the pious ‘Muhoorat’.

As planned by Ishaan, the priest lies to the Kapoors about there being no auspicious day within two weeks.

However, Priya states that the auspicious day doesn’t matter to Sarah and trust is the foundation of any relationship.

Ram takes it otherwise thinking that Priya wants to get away from him as soon as possible and the wedding date gets decided within the week.

Further, Ram goes to Pihu's room to impress her with gifts, toys, and cakes.

Ram reminisces an old memory with Priya when Pihu schools him for calling his servants with wrong names.

However, Pihu denies accepting anything from Ram and says harsh words to him about him being not her father who brings gifts for her.

At the same time, Priya arrives there and sees the scene unfold before her eyes.

Thereafter, Priya talks to Pihu and schools her for talking rudely to Ram. Pihu replies that she got scared by Ram that he will snatch away Priya from her.

Priya suggests Pihu go on cycling which will improve her mood. Ram overhears them and goes to ask Aditya to arrange bicycles for the three of them.

Priya denies Ram from tagging along which leads Ram to misunderstand her and the two gets into a heated argument.

At last, Priya tells Ram to help himself as she is unable to do it.

© Copyright tellybest.com, 2022, 2023. All Rights Reserved. Unauthorized use and/or duplication of any material from tellybest.com without written permission is strictly prohibited.
Cached Saved on: Wednesday 25th of January 2023 06:45:45 PMCached Disp on: Thursday 9th of February 2023 08:37:46 AM