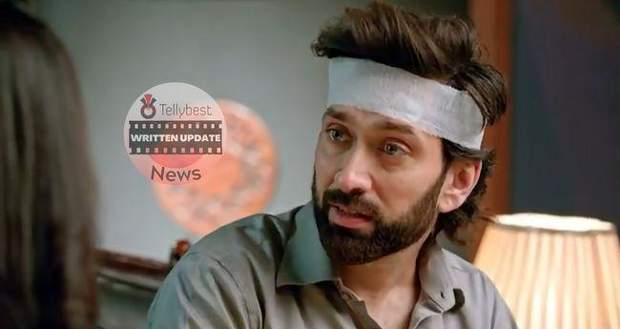 Today's Bade Ache Lagte Hain 2 14th November 2022 episode starts with Priya coming into the washroom with tears in her eyes after seeing Ram and Vedika dancing together.

Ram gets lost in his flashback of Priya’s memories and drops Vedika after which she walks out of there in anger.

As Ram returns to his senses, he notices that Vedika has vanished and goes to the washroom thinking she is there.

Ram calls Vedika from the outside of the washroom while Priya gets happy to hear Ram’s voice.

Asking for forgiveness from Vedika, Ram tells Priya that he knows what she is going through for him but reminds her of that one incident that changed everything between them.

Ram tries to assure Vedika that they are meant for each other by seeing how they are still around each other, which enlightens Priya’s mood.

Ram says that they should start with friendship which will lead them to fall in love with each other eventually.

Priya smiles through her tears while Ram forwards a tissue from the door for her to wipe off the tears.

Priya adjusts her hair according to Ram’s instruction bringing smiles to both their faces.

Ram says that he has brought roses for her and utters the line about it not being the roses’ fault which Priya used to tell him.

This makes Priya believe that Ram still remembers their memories and gives her motivation to work to get things right.

Meanwhile, Pihu hears the story of Rapunzel from Sarah and decides that she will visit Ram like the prince who visited Rapunzel.

Ram meets Vedika beside the dinner table and learns that she is not the lady in the washroom to whom he gave tissues.

Vedika understands that something is wrong and sends Ram home by giving the excuse of Nandini’s health.

As Vedika spots Priya in the washroom, she bursts into anger and asks her to stay away from Ram.

Priya tells Vedika not to get agitated as Ram does not remember her and loves Vedika now.

In an attempt to snatch away the roses, Vedika cuts her finger which makes Priya smirk.

Priya tells Vedika that she and her daughter have their fates written already and nobody can change that.

Later, Pihu tries to meet Ram but gets stopped by Nandini who tells her that Ram will die if she comes in front of him.

Pihu cries on hearing that while Nandini assures her that she will call her back once the doctor says that Ram is fine.

Vedika comes back and tells Nandini about the dinner which kills the mood.

Further, Vedika informs Nandini that she will hire Ram’s secretary herself who will work on behalf of her.

© Copyright tellybest.com, 2022, 2023. All Rights Reserved. Unauthorized use and/or duplication of any material from tellybest.com without written permission is strictly prohibited.
Cached Saved on: Monday 21st of November 2022 02:27:51 AMCached Disp on: Saturday 10th of December 2022 03:13:41 PM