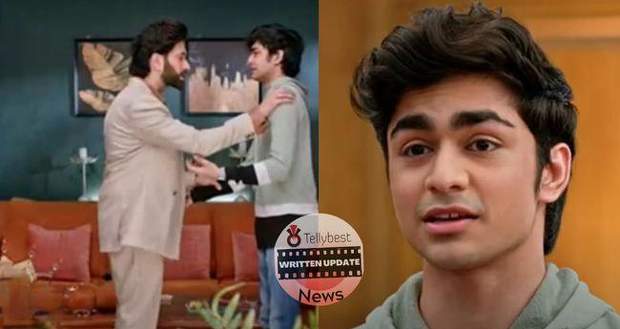 Today's Bade Ache Lagte Hain 2 14th October 2022 episode starts with Pihu stepping away from Priya, saying she doesn't want to be with her.

Nandini takes Pihu away from a crying Priya who is on her knees, heartbroken at her sad destiny.

Meanwhile, Adi, Vikrant, & Brinda ask Krish why he didn't tell them about Ishaan pushing Shivina down the stairs five years ago.

Krish asks all of them why they were not there when Priya was sent to jail and about Nandini who is hell-bent to make Priya's life miserable.

He stands strong with Priya and asks Brinda to come to him the day Ram can fight with Nandini.

After Krish leaves, Sarah comes with teary eyes, hearing everything.

She cries for Priya and reveals she came here to inform that Pihu got to know that Priya was inside jail through the school's principal.

Meanwhile, Ram arrives at the school and sees Priya's photo of jail stuck on the board.

Ram realizes that Pihu got to know the truth while Priya calls herself a curse for everyone.

Sitting down beside a crying Priya, Ram states he knows everything through Ishaan for whom she sacrificed a lot.

Ram holds Priya's hand & says he is a little hurt since she didn't trust him enough.

He then asks Priya if she knows who did this and she takes Nandini's name.

Priya says she has no proof but Nandini threatened her once that she will reveal everything to Pihu one day.

Ram asks Priya to trust him once and she gives him the chit that was found in Pihu's clothes.

On the other hand, Shubham stops Meera from meeting Pihu at Kapoor mansion & Nandini says anyone related to Priya cannot meet her granddaughter.

Just then, Ram comes and asks Nandini to rethink her decision and says Pihu needs her mother the most right now.

Priya holds Ram's extended hand in front of Nandini which burns her in jealousy.

Stating that Priya is not the cause of Pihu's hurt, Ram tells Nandini that no one can stop Priya from meeting Pihu.

However, Shubham says Ram always favors Priya while Ram shoots him a glare.

Sending Priya upstairs along with Meera & Sarah, Ram asks Nandini who could have pasted Priya's jail photos on the school board.

He then asks Shubham to write Rose, Lilly & sunflowers on a piece of paper to match the handwriting on the chit.

Meanwhile, Sarah tells Priya that she knows about Ishaan's truth & asks her to placate Pihu first.

Downstairs, Shubham writes the names of the flowers in front of Ram while Nandini also volunteers to write, scolding him for suspecting Shubham.

© Copyright tellybest.com, 2022, 2023. All Rights Reserved. Unauthorized use and/or duplication of any material from tellybest.com without written permission is strictly prohibited.
Cached Saved on: Monday 21st of November 2022 07:42:39 AMCached Disp on: Thursday 1st of December 2022 01:34:34 AM