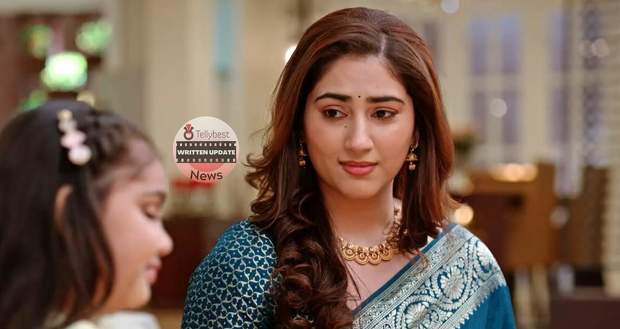 Seeing Priya and Ram together, Pihu gets happy and while roaming in the hallway she collides with Vedika who asks her the reason behind Pihu’s happiness.

Hearing this, Pihu replies she is happy because her mom and Ram are looking very good together much to Vedika’s irritation.

As soon as Pihu walks away, Vedika intentionally drops the card while walking to spoil Ram and Priya’s happiness.

At the same time, Sandy arrives there and urges Priya to with her.

Priya tries to ask the reason but Sandy just drags Priya away.

Seeing this, Vedika gets upset as Priya has not noticed the card on the floor.

In the meantime, Nandini and Subham arrive there and tell Vedika that Sandy is part of their plan, and this time they are going to convince Ram against Priya.

Meanwhile in Sandy’s house, sandy informs Priya that Ram wants to take Pihu away from Priya by filing for custody.

She even shows Priya the lawyer card but Priya tells them that Ram will never take away Pihu as Pihu will never be happy without Priya.

On the other hand, Subham goes to Ram’s room to convince him to go to the airport with him.

When Ram says he cannot go now, Nandini arrives there and urges Ram to take Pihu out.

Later, Krish arrives at Priya’s home and tells Priya that Mr. Chadda does not want to take her case anymore as Ram has already booked him.

Hearing this, Priya still takes Ram’s side by announcing that she is sure Nandini is the one behind it.

Elsewhere, in Kapoor’s mansion, Nandini and Subham start smiling as their plan is in full motion.

Later when Priya arrives at Kapoor’s mansion to meet Pihu, she is shocked to learn Ram and Pihu are not there.

At the same time, Vedika arrives there and they get into an argument about Ram.

During the argument, Priya mentions the visiting card incident which shocks Vedika.

She then walks away leaving Vedika alone.

In the room, she tries to call Ram but his phone is busy while a servant gives her Pihu’s passport.

Seeing this, she calls the agent who informs her that Ram was the one who ordered him to make the passport.

When she comes out of the room, she meets Pihu and Ram in the hallway.

While Pihu narrates the incidents, Ram walks away.

However, Priya overhears Ram telling Subhan that he will execute his plan tomorrow and gets suspicious.

Priya then takes Pihu to her room to ask her about Pihu and Ram’s outing.