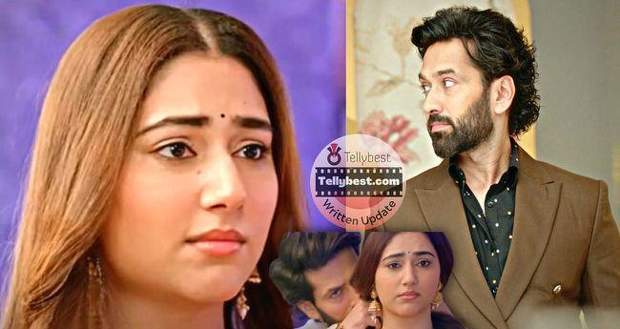 Today's Bade Ache Lagte Hain 2 15th December 2022 episode starts with Ram getting dumbfounded in front of all the media that are flashing lights onto his face as Vedika sits on one knee, hoping for him to say a yes.

Priya's face turns grim as she looks at Ram who keeps quiet for some time.

Krish gives a disgusting side glance to Vedika who has her back turned to everyone else except Ram.

Priya's heart shatters entirely when Ram says a stressed-out yes to Vedika who urges him to reply to her.

However after Vedika derives an answer from Ram, he remembers Priya at that exact moment and a kaleidoscope of memories rushes into his brain like a movie.

Vedika gets happy while Krish and Priya go outside the farmhouse and Vikrant and Aditya request the press to move out as well.

Ram then grabs Vedika's elbow and says what was this since she basically ambushed him.

Vedika gets confused and reminds Ram of his promise of marrying her but Ram asks her why she wants to marry someone else who treats her as a friend.

She panics and starts crying when Ram states that he is not sure of his feelings.

After Ram leaves, Aditya and Vikrant mock Vedika for thinking that she won because she can't since Ram will always run back to 'his' Priya, no matter in what appearance she comes in front of him.

Vedika screams at them to shut up but Vikrant and Adi laugh together and urge Vedika to accept this truth.

Meanwhile, Priya is panicking as well and tells Krish that this cannot happen since Ram mumbled her name in his sleep.

Ram sees both of them and he thanks Krish under his breath for taking care of Priya since he cannot reveal that he remembers everything now.

A reel of memories plays again and in a flashback, Ram wakes up with Lovely beside him when he got unconscious and mumbled Priya's name in his sleep.

He gets confused by Priya in this new avatar and reads the message from Meera Ma which states that Priya is pregnant.

Momentarily, Ram grins and mentally says that the Diwali they made together is successful as he is going to be a father again.

He then hears Nandini and Vedika talking to each other downstairs.

Nandini promises Vedika that she won't let Ram remember anything and Ram eavesdrops on the entire conversation, vowing not to let Nandini hurt Priya anymore.

The flashback ends and Priya waits for Ram outside his farmhouse with Krish.

She doesn't know that Mr. Kapoor is secretly listening to her and promises that the next move will be his as he has finally arrived to protect his family.

The next day, Ram calls Aditya from Kapoor Mansion and asks him if he has thought of a way to tell the media that he and Vedika are not marrying.

Nandini gets confused since Vedika told Ram has accepted her proposal.

Meanwhile, Aditya and Vikrant visit the Sood House and calm down a hurt Priya, saying that Ram is going to deny that he is going to marry Vedika.

Vikrant gently reminds Priya that no matter even if he doesn't remember her, her love will always win.

Ram gets a flashback of Nandini telling Priya that she doesn't love him but his money and greets her with a morning hug.

Shubham joins them later and asks Ram to join Yash Khanna in business as Sid brought the contact.

Shubham remains hopeful for Ram's permission but Ram first asks him to show him the proposal, surprising both Shubham & Nandini by his rude tone.