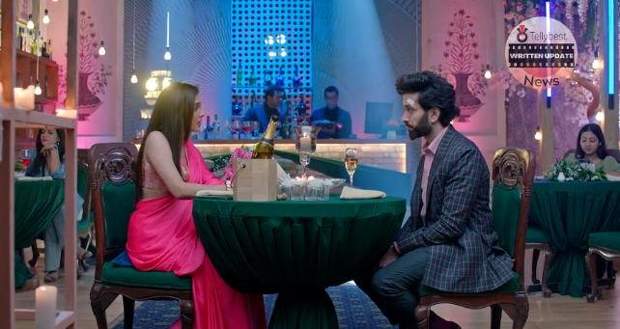 Today's Bade Ache Lagte Hain 2 15th November 2022 episode starts with Sandy telling Priya about Vedika who was acting on the phone as if she was Ram's wife.

Sandy complains, saying Vedika wants to hire a PA (personal assistant) for Ram who can keep her eyes on him 24/7.

Just then, Priya mentions she acted as Ram's PA one day along with Pihu to cheer Ram's mood up.

Sandy looks at Priya suggestively while Priya gets horrified, saying she doesn't think she can act as Ram's PA in a different makeover.

The next morning, Ram wakes up and sees a bouquet of lilies at his bedside.

He sends a thank you message to Vedika for the flowers but Vedika texts back, saying she didn't send him the flowers.

On the other hand, Priya gets shocked when she sees Sandy sitting between a pile of wigs on the bed and asking her to choose one.

After seeing Priya's shocked expression, Sandy advises her to think if she wants to do this and leaves the room.

Priya asks God to send her a signal whether she should go ahead with this plan or not & receives Ram's call as a sign.

Ram blabbers to Priya about how busy she is to not pick up his calls.

He rudely says thank you to Priya for paying his pharmacy bill while she calls him Mr. Kapoor out of habit.

Ram's mind shows him a reel of hazy memories with Priya.

To cover the slip-up, Priya tells Ram everyone knows how famous he is while he says he wants to meet her.

After cutting the call, Nandini enters Ram's room, advising him to take Vedika out for lunch but he lies stating he has some work.

Meanwhile, Vedika asks Sandy to transfer the presentation to her via a pen drive, thinking she will fire Sandy later after messing up her presentation.

At Sood House, Priya puts on the wig and Krish makes fun of her look.

Priya asks Krish to take care of Pihu while she goes to see Ram but Pihu hears this.

At Ram's office, Sandy demonstrates her presentation to Ram while Vedika tries to pick out faults in it.

Just then, Shivina's photo pops up & Ram's mood changes as he says that his baby sister hasn't even asked about his health after a big accident.

Vedika puts Nandini on the call who tells Ram that Shivina is doing a jewelry course in the U.S.

Later, Priya waits for Ram at Lover's cafe while Sarah gets excited and calls Priya "Lovely" which Ram hears and thinks Priya's name is Lovely.

Ram thanks Lovely for paying his medicine bill while Sarah awkwardly asks Ms. Lovely what she will have to eat with her guest.

Ram remembers this cafe and tells Sarah that his sister Shivina used to rave about this place's vegan cupcakes.

© Copyright tellybest.com, 2022, 2023. All Rights Reserved. Unauthorized use and/or duplication of any material from tellybest.com without written permission is strictly prohibited.
Cached Saved on: Monday 21st of November 2022 08:56:04 AMCached Disp on: Thursday 1st of December 2022 01:19:40 PM