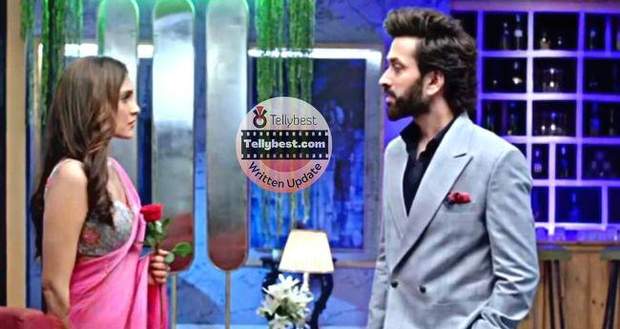 He tells Ram that he is a changed man now but Ram replies that trust is important in meetings so he will first peruse his presentation and then see if he can strike the deal.

Shubham's smiles fade away a little but to be in the good books of Ram, he says he will not go to the office today and stay for his biological mother's Barsi.

Nandini gets shocked, first at Ram's behaviour and the chameleon change in Shubham's manners and mode of conduct.

Meanwhile, Priya messages Ram that she is happy about his upcoming wedding but Ram senses her sadness in the message instantly.

He calls her and lets her know that there is no wedding going to happen between him and Vedika.

Rather he needs to tell this news to the media but doesn't know how to do it.

Priya advises Ram to spread this announcement via Nandini since she has good connections with the press and is close to both Ram and Vedika.

Ram likes the idea and says to himself that the time has come for Nandini to see his anger since she had always seen his love.

At Sood House, Aditya and Vikrant congratulate Priya for her winning strike since she is clean bolding Nandini every time, however, Priya says she has to go to Kapoor Mansion to help Mr. Kapoor with his mother's Barsi.

Meanwhile, Nandini gets shocked when Ram asks her to tell the media that he is not going to marry Vedika.

She pretends to be hurt but changes her color and turns to Vedika, saying she cannot help her if Ram doesn't want to marry her.

However, Vedika states that Lovely has instigated Ram against her but Ram doesn't agree.

Nandini reminds Ram that he encouraged Vedika's hopes but Ram clear-cut states that he always treated her as a good friend, even after she married Sashi.

Ram then asks Vedika to change her thinking since if Lovely wanted to instigate him, she should have advised for him to announce it to the media.

He hugs Nandini and mentally says that now he will see how long Vedika stays with Nandini while Vedika fumes in anger.

At Sood House, Priya wears the bangles Ram gave to her after their marriage while Pihu teases Priya taking Ram's name, wearing her bangs, and pretending to be Lovely.

In his room, Ram is talking to Swati's (his real mother) photo when Priya suddenly enters and shocks him.

He thinks that Priya heard all his mumbling while she only hands him the speech he has to say at his mother's Barsi.

She then takes out the bangles he gave to her and says that her husband gave them to her.

Ram gets quiet when Priya steps closer to button his white Kurta up. Priya's plump lips entice Ram as a kaleidoscope of their first instances runs through his mind, from getting stuck in the rain to their first hug.