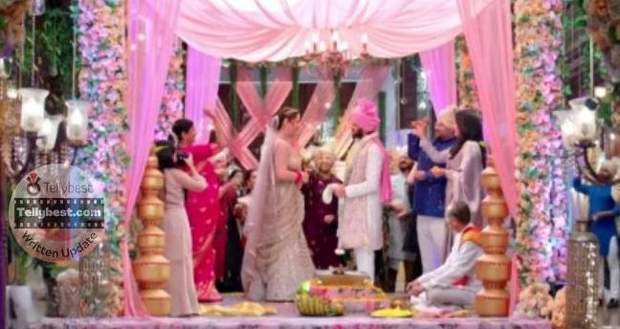 Pandit ji asks for someone to do Ram's and Priya's gatbandhan at which Priya worriedly thinks to herself that this right solely belongs to Swati.

Pihu goes to Meera and fetches her to perform the Gatbandhan as it was pre-decided.

However, Nandini requests Priya to let her tie the Gatbandhan knot and that she just wants to fulfill a mother's responsibility.

Shubham also barges in and asks Ram to forgive Nandini and let her do the Gatbandhan.

Priya says that Nandini is right, it is Ram's real mother's responsibility to do the gatbandhan.

Nandini says that Swati is Ram's real mother but she is not among them and is dead. Priya quickly responds to Nandini that Swati is alive making everyone in the ceremony surprised.

Ram looks at Priya in astonishment while Priya tries to explain everything to him starting from the sangeet ceremony.

Ram asks Priya to stop as Swati is dead, however, Swati enters at the exact moment along with Lakhan.

Swati calls out Ram's name while he looks at her unbelievably with teary eyes.

Priya tells Ram that this was her surprise for him all along.

Swati slowly moves towards Ram and hands him the handmade tonic that she has prepared for his asthma attack.

Ram gets overwhelmingly emotional while Swati says that she knows only this medicine can take Ram's pain away.

Priya asks Ram to go to Swati and meet her properly, as it is destiny that has played a beautiful game in their lives.

Priya holds Ram's hand and takes him to Swati while Pihu asks Priya if Swati is her angel grandmother.

Swati looks at Pihu and holds her close to her chest while Ram stares blankly at Swati having a million questions in his head.

Priya tells Ram to be in the moment and just for a second, forget all his questions and savor his time with her.

Ram remembers that it was Swati who came to him vouching for Lakhan, and realizes that Lakhan is his real brother.

Priya says that she found it difficult to tell Ram the truth but when Pihu said that the Gatbandhan right belongs to the mother, she realized that she has to bring Swati into his life immediately.

Priya then asks Swati to tell the reason for hiding her reality and telling everyone that she is dead.

The color from Nandini's face vanishes while Lakhan says that he does not understand what is going on.

Yash tells Ram that he had no idea Swati was his mother. He also asks Swati why did she hide her reality from her.

Swati feels compromised as she knows that the truth will be very heavy on Ram's life.

Ram says that he has a lot of questions in his head but none  of that matters now as she is right in front of him.

Ram falls down on Swati's knees and then hugs her tightly while crying. Swati holds him lovingly in her arms while everyone watches them in awe.

Pandit ji says that the muhrat is running out and it is time for their Gatbandhan.

Nandini thinks to herself that she needs to do something or else her plan will fail and destroy her.

Swati says that she doesn't think she should do Ram's gatbandhan as Meera was about to do that, however, Meera says that this right solely belongs to Swati.

© Copyright tellybest.com, 2022, 2023. All Rights Reserved. Unauthorized use and/or duplication of any material from tellybest.com without written permission is strictly prohibited.
Cached Saved on: Wednesday 25th of January 2023 10:31:25 AMCached Disp on: Sunday 5th of February 2023 02:48:30 AM