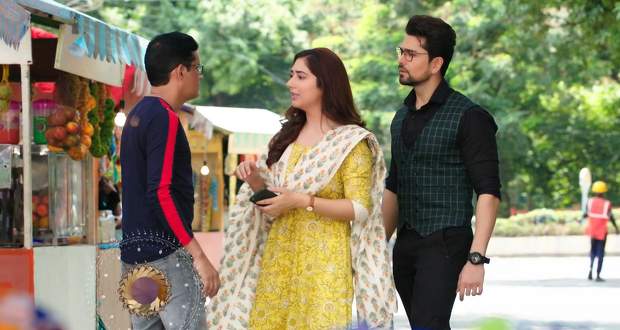 Today's Bade Ache Lagte Hain 2 16th June 2022 episode starts with Pihu telling everyone how Vedika is the one who was doing a mistake by driving on the wrong side.

Vedika refuses to admit her mistake and blames Pihu for coming in front of her car.

As Pihu says that Vedika does not have any manners, Vedika was about to slap Pihu but gets stopped by the arrival of the police.

The police get to know the whole matter from the spectators and ask Vedika to come to the police station with them.

Meanwhile, Ram insists on coming home but Nandini asks him to go to Vedika as she is in some problem.

Priya and Krish also arrive at the location while Vedika remain busy on the phone.

After checking on Pihu, Priya decides not to lodge a case against Vedika and leaves with Pihu and Krish.

Ram arrives at the police station and spots Priya and Krish happily walking away with their daughter.

After giving the fine, Ram asks Vedika why she told everyone that she is his fiancé when in reality she is not.

Vedika tries to give excuses but Ram shuts her down from responding and leaves.

Later, Priya and Krish prepare several dishes for Pihu and tell her not to leave alone again.

Sarah video calls Priya so that Meera can take a look at Pihu while remaining hidden.

After Sarah’s several requests, Priya agrees to let Sarah take Pihu with her to the engagement.

Meanwhile, Ram meets with Ishaan and subtly provokes him against Sarah’s relationship with another man.

Ishaan strongly opposes Sarah’s marriage to Vikrant and tells Ram that she has to choose one thing between the two.

© Copyright tellybest.com, 2022, 2023. All Rights Reserved. Unauthorized use and/or duplication of any material from tellybest.com without written permission is strictly prohibited.
Cached Saved on: Tuesday 22nd of November 2022 09:25:25 AMCached Disp on: Monday 5th of December 2022 12:34:08 PM