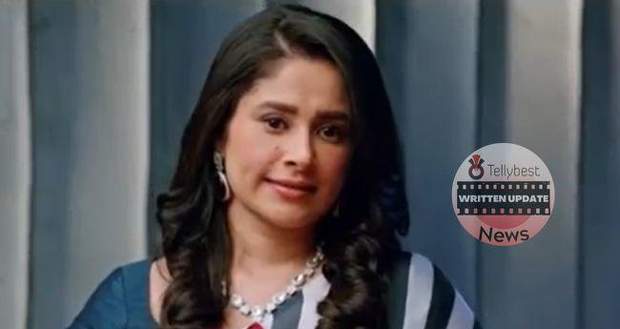 Vedika tells Sandy she is sure to ruin both Priya’s & her family members' lives.

On the other hand, Krish spends time with Pihu but she looks for ways to sneak out to see Ram.

Meanwhile, Ram stutters as he talks with Lovely (Priya) & calls Aditya to send the payment through his bank into Lovely’s account.

Sarah gets intrigued and asks Priya aka Lovely how much amount does Ram owe her.

Ram says it is five hundred rupees while Lovely taunts him, stating he thinks she wouldn’t be able to live her life if he doesn’t pay her back this “big” amount.

Priya doesn’t give Ram a chance to reply as she rambles on, saying he thinks since she doesn’t wear branded clothes, that’s why she needs money.

Ram can only stare widely at Lovely as she claims she is no thief and can earn money and he can keep the five hundred rupees as a gift.

Ram being Ram Kapoor from Bandra questions Lovely about what job she has.

Sarah gets awkward when Ram asks what does Lovely orders whenever she comes.

Sarah jokes that Lovely likes black coffee while Ram says he knew it since nothing sweet rolls off her mouth.

He leaves immediately while Pihu turns her back so Ram doesn’t see her.

However, she fakes falling on the spot and hurts her knee.

Ram’s head gets filled with hazy flashbacks while he picks up Pihu and calls her “beta” (dear child).

When Krish comes, Pihu immediately runs to him and apologizes to Priya for coming in front of Ram.

Priya consoles a sad Pihu, saying it doesn’t matter if Ram remembers them or not, they will create new memories.

Priya then tells Krish she will be applying as Ram’s PA in her new avatar.

Just then Sandy comes and informs Priya about her name being terminated from the job.

Priya feels alone & asks Krish to guide her next.

Later, Aditya tells Ram that Vedika fired Sandy while Ram asks him to call her back.

Ram tells Vedika they cannot fire good employees since they are the company’s pillars.

A second later, Krish calls Vedika and asks her to make Ram stay away from Priya since he came to meet her at a café.

Vedika burns in jealousy while Krish asks Priya not to take Ram’s affectionate words for Vedika to her heart.

Vedika then asks Ram where he was in the afternoon and he replies honestly.

Later, Vedika asks Krish to meet her once and leaves while Priya gets happy that she will be able to give her interview without Vedika’s presence now.

At Kapoor's Office, Ram gets a series of hazy flashbacks and he binges on medicines until his headache calms down.

© Copyright tellybest.com, 2022, 2023. All Rights Reserved. Unauthorized use and/or duplication of any material from tellybest.com without written permission is strictly prohibited.
Cached Saved on: Monday 21st of November 2022 04:57:01 AMCached Disp on: Wednesday 7th of December 2022 01:26:46 PM