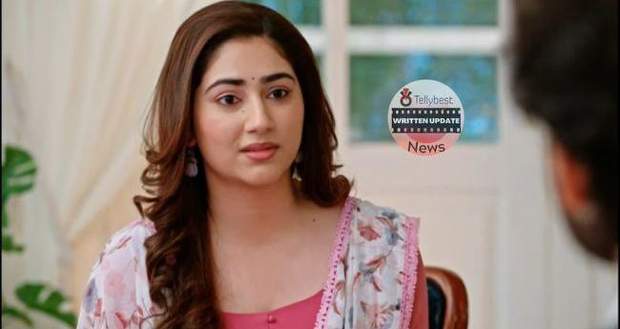 Today's Bade Ache Lagte Hain 2 16th September 2022 episode starts with Krish stopping Vedika on the road and asking her what she is doing there.

Vedika does not answer Krish’s doubt and walks away thinking that their plan is working perfectly.

Ram comes to Pihu’s room so that he and Priya can tell Pihu about Ram being her father.

However, Priya informs Ram that Pihu has already gone to sleep, but if he still wants to talk to her, she can wake her up.

Ram stops Priya from waking Pihu up and decides that they will talk to her the next day.

After Ram leaves, Pihu wakes up and asks Priya if her acting was enough to convince Ram that she was asleep.

Priya praises Pihu for her acting and asks her to get ready for the new adventure they are about to begin.

Pihu asks Priya if they are gonna leave without saying anything to Ram to which Priya agrees and tells Pihu that doing so is the main essence of the game.

Still, Pihu acts a bit hesitant and asks Priya if she will be able to see Ram if he fails to find her and Priya.

Priya decides not to think about her decision further and asks Pihu to get ready to leave.

Meanwhile, Shubham also asks Ram to accompany him to the airport to welcome a client.

Ram agrees and joins Shubham near the car where Priya and Pihu also arrive and hide behind the wall.

Pihu asks Priya to rethink her decision as she does not feel right leaving like that but Priya walks in the other direction.

Shubham gets a call from Vedika suddenly and talks with her when Ram snatches Shubham’s phone and listens to Vedika.

Vedika tells Shubham that a disaster has happened in the house and then realizes it is Ram on the other side.

Nandini passes Priya’s room and stops in her tracks after seeing Priya and Pihu unpacking their things in their room.

Ram returns and asks Vedika and Nandini about what has happened but they fail to answer.

Just then, Priya comes and says that she and Vedika had an argument because Vedika visited the custody lawyer.

Ram gets furious after learning that Vedika has gone to the lawyer but Vedika shifts the blame to Priya for approaching the lawyer first.

Priya calls Sandy and asks her to tell them where she found the lawyer's card and Sandy tells everyone about Shubham giving it to her.

Shubham shifts the blame to Vedika and says that he did everything at Vedika’s command.

Nandini supports Vedika’s doing and says they should file custody, but Ram disagrees.

Krish comes with the lawyer and confirms that the lawyer has been approached from Ram’s side through Vedika.

Ram denies doing anything related to the lawyer and assures Priya that he was unaware of the truth.

© Copyright tellybest.com, 2020, 2021. All Rights Reserved. Unauthorized use and/or duplication of any material from tellybest.com without written permission is strictly prohibited.
Cached Saved on: Saturday 1st of October 2022 10:40:08 PM