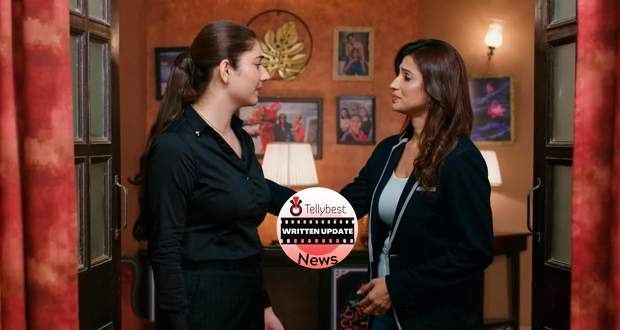 Today's Bade Ache Lagte Hain 2 17th August 2022 episode starts with Krish and Ishaan waiting for the blackmailer to show up at the designated place to meet.

Vedika reaches the entrance and wonders where Nandini is as she has to be there to talk with Ishaan.

While leaving away, Vedika mistakenly pushes a plant and its sound makes both Ishaan and Krish careful.

Vedika escapes while Ishaan and Krish come out and find an earring there belonging either to Vedika or Nandini.

Meanwhile, Priya feels dizzy and has difficulty breathing after taking the medicines and faints in Ram’s arms while he comes to talk to her.

Ram gets nervous about seeing Priya’s condition and instantly rushes to the hospital with her.

On his way, Pihu calls Priya continuously which Ram picks up as she will get worried if ignored.

Ram tells Pihu that Priya is fine and has forgotten her phone and asks her to get ready for the function.

After reaching the hospital, Ram meets Tapsee Pannu who makes a small cameo and makes him realize that things can be complicated if overlooked.

Priya regains her consciousness and tells Ram that she is not lying about Nandini.

Ram does not believe in Priya and asks her to stop blaming Nandini for using fake medicines.

To prove herself, Priya calls the doctor who checked on Pihu but he tells Ram that Pihu swallowed a low dosage of the medicine.

Shubham gives money to the doctor and thanks him for helping him.

Meanwhile, everyone gets ready for the Haldi ceremony while Brinda sneakily takes Pihu’s hair for a DNA test.

Ram asks Priya why she is doing such stubborn things and says that he regrets asking her for help.

Hearing that, Priya says that she and Pihu will leave after helping him with the interview but Ram says that he will manage alone.

With a broken heart, Priya tells Ram that she and Pihu will leave immediately after they attend Sarah’s wedding.

© Copyright tellybest.com, 2020, 2021. All Rights Reserved. Unauthorized use and/or duplication of any material from tellybest.com without written permission is strictly prohibited.
Cached Saved on: Saturday 1st of October 2022 09:54:30 PMCached Disp on: Wednesday 5th of October 2022 05:49:20 PM