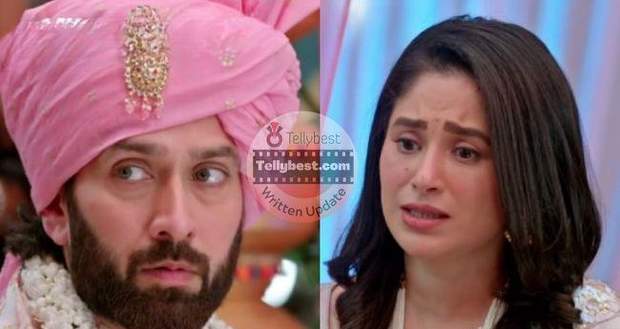 Today's Bade Ache Lagte Hain 2 17th January 2023 episode starts with Priya holding Swati's hand and taking her to the Mandap to do the Gath Bandhan.

Nandini bitterly looks at them while Swati ties the Gatbandhan knot and is worried that Swati might spill her truth.

Pandit ji asks Ram to fill the sindoor in Priya's head and also make her wear the Mangalsutra.

Ram looks at Priya with a lot of love in his eyes and thinks that how Priya has filled so much love and magic in his life while Priya thinks that no one will now snatch away their happiness and they will finally be the happy family Pihu always dreamt of.

Ram and Priya get up and take blessings from everyone while Swati asks Lakhan to leave now.

Ram asks her what she means by leaving.

Swati says that she doesn't find it necessary to give him all the answers and also that Priya has tricked her into coming here.

Nandini asks Swati why has she come back into their lives knowing that it will not bring Ram peace.

Ram says that how can Nandini hide such a big thing from him at which Nandini says that she was only keeping her promise to Ram's father.

Priya thinks that Swati might be afraid to spill the truth in front of Nandini.

However, Swati lies that she left him because his father didn't have enough money to give her a luxurious lifestyle.

Ram says that he knows this is not the truth as she was the one who taught him that there is no greater power than the power of love.

Nandini pretends to cry and asks Swati to stop unveiling the hurtful memories of their past.

Swati plays along with Nandini's pretentious act and says that Ram is the one who brought the topic up and it is also Nandini's fault that she couldn't give Ram a proper upbringing and that is why he is embarrassing her in front of everyone.

Ram stops Swati in the middle of her sentence and asks her to put a hand on his chest and swear that she is not lying.

With a very heavy heart, Swati does as she's told.

Swati blames Ram's father for her condition and says that is why she cursed him back which led to his demise in the accident.

Ram loses his temper and says that all this time he worshipped a woman who was the reason behind his father's death.

Lakhan asks Ram to lower his voice and then holds him by his collar saying that Ram should act respectfully as Swati came here to help him.

Lakhan says that they are poor but loyal and no matter what the truth is, he will always stand by his mother.

Lakhan then says that Ram doesn't know the value of relationships and that is why all his loved ones leave him and go just like Swati did.

Ram says that Lakhan's horrible attitude is the outcome of his bad upbringing.

Lakhan cannot control himself any longer and raises his hand to strike Ram, however, Ram holds his hand in the air firmly.

Priya holds Ram back and asks Swati if whatever she said was true then she has to prove it.

Swati tells them to go through Ram's father's belongings as there they will find a letter where she has confessed everything that she said here.