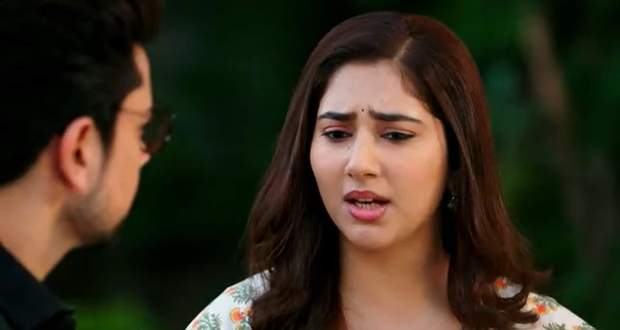 Today's Bade Ache Lagte Hain 2 17th June 2022 episode starts with Ram talking with Ishaan and asking him to make a decision about what he will say to Sarah.

Ishaan thinks about Ram’s words about marriage and decides that he will give Sarah a choice to choose between him and Vikrant.

Meanwhile, Sarah and Pihu prepare themselves to attend the party when Priya comes there.

Sandy arrives with the costumes and other things and asks Sarah and Pihu to get ready as soon as possible.

While watching Priya, Sarah expresses her wish to have Priya by her side during the engagement so that she does not feel alone.

Priya feels bad about not accompanying her sister but still refuses to agree to Sarah’s wish.

After Sandy leaves with Pihu to get her ready, Sarah and Priya sit together and talk about how everyone has changed after that incident.

Sarah talks about Brinda who acts mean to her all the time after Shivina’s accident.

Meanwhile, Ram, Brinda, Aditya, and others check on the preparations of the party only to plan how to spoil it.

Later, Sarah gets ready and bids goodbye to Priya to leave for the party along with Pihu.

Aditya comes to Ram with some legal papers which state that Ishaan wants to get separated from Sarah.

As Ram discovers from Nandini that she is the one who prepared those, he instantly disapproves of it.

Pihu arrives at the party with Maitri where she meets Meera for the first time.

On seeing Pihu for the first time, Meera gets a bit emotional and caresses her with love and adoration.

Meera talks about how Pihu is so similar to Ram and prays to God that Pihu and Ram reunite with each other soon.

On the other hand, Krish asks Priya to celebrate Sarah’s engagement with him.

Priya refuses at first but agrees to join him after Krish insists on her numerous times.

© Copyright tellybest.com, 2022, 2023. All Rights Reserved. Unauthorized use and/or duplication of any material from tellybest.com without written permission is strictly prohibited.
Cached Saved on: Monday 21st of November 2022 08:40:58 PMCached Disp on: Monday 5th of December 2022 12:49:19 PM