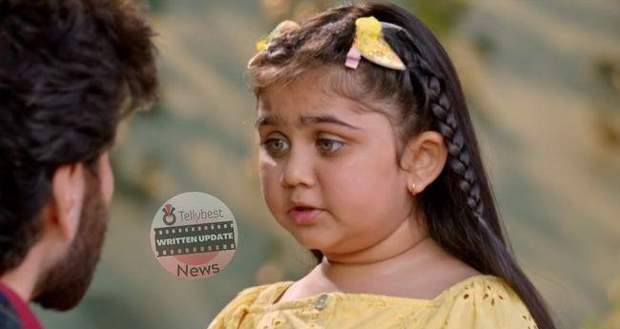 Just then, he gets a message from Lovely (Priya) saying he didn't have to pay for her black coffee monthly bill at Lover's cafe.

She calls him "Khadoos" (rude) & Ram texts her "Khadoos" back.

Meanwhile, Priya gets hit by Vedika's car and a crowd envelops both of them soon.

Priya shouts at the owner to come out & the crowd supports her.

Once Vedika sees it is Priya, she says how dare you while Priya takes advantage of the situation and instigates the crowd against her.

Police arrive at the spot & the lady constable arrests Vedika.

A flashback gets shown where Pihu tells Priya how Vedika always shamed her even when she didn't know Pihu was Ram's daughter.

The flashback ends & Priya smiles, stating she will take revenge for every little thing Vedika has done against Pihu & Ram.

At Ram's office, weird & flirty girls come for the interview and give Ram a heart attack.

After having enough of the drama, he calls Tarun to give him his coffee.

However, there is another surprise awaiting him when Lovely comes into his cabin.

Ram calls her a stalker and says she must be a part of a gang to extract money out of rich people but he corrects himself after Lovely lectures him over good manners.

Shubham then barges inside Ram's cabin unannounced while Lovely tells Ram nobody should enter the MD's room without knocking.

Shubham gets offended and tells Lovely to stay within her limit.

However, Ram takes Lovely's side and announces he will hire her as his PA.

Shubham storms out angrily while Ram forgets Lovely's name and calls her Beauty, Pretty, & whatnot.

Priya feels glad that Shubham didn't recognize her and folds her hands forward to hug Ram.

Ram instantly ducks down and looks at Lovely weirdly while she chuckles and shakes his hands instead.

She promises Ram to be on time and then looks at the flowers kept on his table.

Ram says he bought them for the little girl he met outside the cafe but gives them to Lovely instead.

On the other hand, Vedika argues with the constable to let her go when Priya joins her along with Pihu.

The constable asks Vedika to pay the fine and get released while Priya tells Pihu that truth will always triumph over evil.

Vedika asks Priya whether Ram met or not but Priya denies it and accepts her defeat publicly to fool Vedika.

Vedika informs she got arrested after hitting Priya while making a promise to get Ram to fire this new over-smart PA of his.

At Sood House, Priya gives the flowers sent by Ram to Pihu and tells her what happened today.

Priya is determined this time to make Lovely Singh win against Nandini, Shubham, & Vedika this time.

© Copyright tellybest.com, 2022, 2023. All Rights Reserved. Unauthorized use and/or duplication of any material from tellybest.com without written permission is strictly prohibited.
Cached Saved on: Monday 21st of November 2022 12:43:03 AMCached Disp on: Wednesday 7th of December 2022 02:47:46 PM