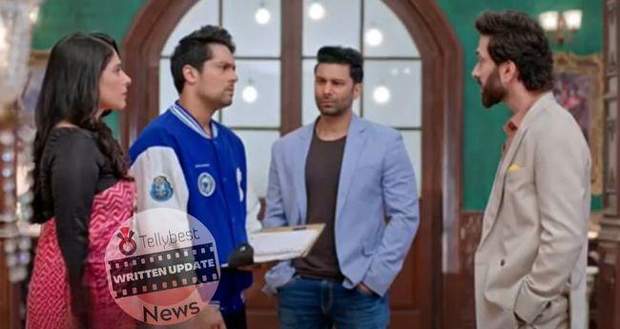 Further, Ram asks Nandini in a stern voice to say a 'yes' or a 'no' whether she had told Pihu's principal about Priya going to jail while Nandini denies doing so.

Ram watches Priya talk to herself emotionally from the door & feels Pihu has to give her another chance.

Meanwhile, Shubham goes mad and throws things around as Nandini tries to calm him down.

On the other hand, Sarah comes to apologize to Ram on Ishaan's behalf, saying she didn't know about Priya's sacrifice.

Ram then promises Meera & Sarah to be there for Priya as she had been hurt too much.

Meera praises Ram's generosity as he hugs both of them and states no one can match Priya's, big heart.

Just then, Ram gets a call from the Judge presiding over the custody case who now knows about Priya going to jail from Nandini.

Sarah gets tensed while Ram goes to search for Priya who is at Lover's Cafe.

Suddenly, Priya encounters herself as she looked five years ago.

Priya from five years ago asks a current Priya how come she has gotten so emotional and left Pihu all alone at Kapoor Mansion under Nandini's evil eye.

Past Priya tells a current Priya that she cannot win from Nandini as she can give everything Pihu wants material-wise.

Current Priya gets desperate and says she will get Pihu back through her love & starts making a chocolate cake for her.

Past Priya taunts Current Priya, stating Ram has a lot of money that can fulfill all of Pihu's demands.

However, Current Priya says she believes in the power of love while the Past Priya asks what she would say in front of the judge.

Just then, Ram comes to meet Priya who tells him that love makes people selfish.

Ram knows this and states if loving Pihu and doing the right things for her is selfish, then he IS selfish.

Priya goes teary-eyed at the prospect of meeting the judge.

Ram firmly tells Priya he will be her shoulder as she hugs him, saying she cannot fight the world alone.

Ram promises Priya he will never get angry at her.

On the other hand, Nandini tells Shubham to convince Ram that they didn't make the chits and throw Vedika under the bus.

However, Shubham doesn't support betraying Vedika but Nandini is too scared of Ram's changed behaviour.

At Lover's Cafe, Ram says he is mad at himself for thinking Priya could be the culprit for Shivina's death.

However, Priya states she is fearful for Pihu & Ram promises to punish the person who did Pihu wrong at her interview.

© Copyright tellybest.com, 2022, 2023. All Rights Reserved. Unauthorized use and/or duplication of any material from tellybest.com without written permission is strictly prohibited.
Cached Saved on: Monday 21st of November 2022 01:27:25 AMCached Disp on: Tuesday 29th of November 2022 12:04:11 AM