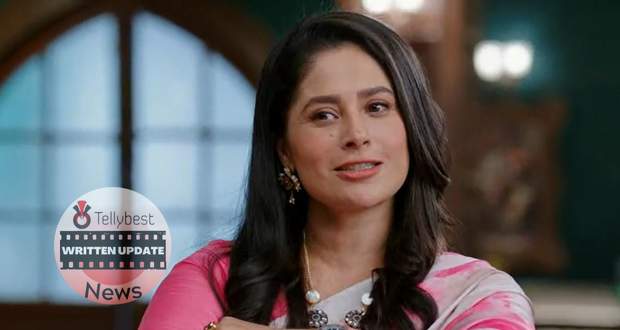 Meanwhile, Brinda waits for Ram to arrive so that she can take a sample of his hair and reveal the mystery about Pihu's father.

Further, Brinda goes to Sara and talks to her hoping that she can learn the truth from her.

Just then, Ram and Priya come there and Pihu rushes to Priya asking for her permission to celebrate the Janmashtami with Ram.

However, Priya feels upset recalling how Ram told her to leave with Pihu and leaves without giving her any answer.

Ram goes after Priya and asks her why she didn't deny Pihu's request which causes them to banter like children.

Priya announces that she won't say anything to Pihu or stop her from celebrating Janmashtami which annoys Ram.

On the other hand, Brinda asks Sara why Priya didn't marry Krish or why Pihu doesn't call him father.

Sara recalls Priya telling her about Nandini's threats and states that there is no need to discuss it as they broke relations in the past without clearing any misunderstandings.

Brinda apologizes and talks to Sara while thinking that Pihu is surely Ram's daughter.

Further, Krish comes and talks to Pihu apologizing to her as he reveals that he won't be present at the Janmashtami.

Elsewhere, Priya tells Ram that he will have to break the promise he made to Pihu and leaves as Brinda comes there.

Brinda further makes an excuse of Ram having white hair and pulls out some strands of his hair which she collects in a ziplock bag.

On the other hand, Nandini requests Ishaan to go upstairs and bring a guest downstairs.

However, Ishaan goes into the room and sees a message calling him a murderer written with lipstick on the mirror which makes him panic.

Back at the party, everyone dances while Ram and Priya stand next to each other as Pihu pulls them closer to each other to make them dance together.

Ishaan brings Krish upstairs to show him the message written on the mirror but gets even more frantic seeing the mirror clean with nothing written on it.

Later, as the Haldi ceremony is going on, Krish and Ishaan come downstairs to inform Priya but get distracted as the doctor comes there.

Priya reveals that she called the doctor to give Nandini an injection since she accidentally destroyed her medicines.

After, Ram's investor asks what has happened and Priya informs him that Nandini is on anti-depressants pills ever since her daughter Shivina's death.

© Copyright tellybest.com, 2020, 2021. All Rights Reserved. Unauthorized use and/or duplication of any material from tellybest.com without written permission is strictly prohibited.
Cached Saved on: Saturday 1st of October 2022 10:16:17 PMCached Disp on: Thursday 6th of October 2022 04:33:59 PM