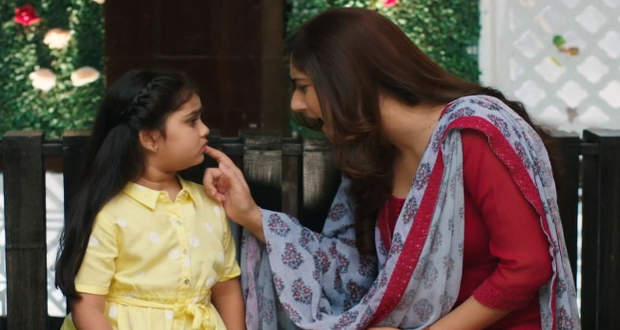 Today's Bade Ache Lagte Hain 2 18th July 2022 episode starts with Ram offering a drink to Priya but Priya refuses to accept it as she does not drink anymore.

Ram remembers seeing champagne on Priya and Krish’s table at the restaurant and feeling a bit upset.

Trying to understand Priya’s point of view, Ram promises that he will not force Pihu anymore to like him as she is just a child.

Priya understands that Ram is about to say sorry and stops him as he has not made any mistake.

Suddenly, Pihu calls Priya from a distance and asks her to join her immediately.

Meanwhile, Aditya, Vikrant, Sarah, Sandy, and Shubham discuss how they can improve the relationship between Ram and Pihu.

Sandy gives an idea about arranging a dance performance of Ram with Pihu which Shubham snatches and tells everyone as his.

However, considering the fact that Pihu and Ram cannot stand each other, Aditya says that the idea will fail immediately.

While leaving, Sarah asks Sandy why she lets Shubham take all her ideas.

Sandy says that she feels guilty for what happened to Ram’s family because of them and wants to help them out.

In the meantime, Pihu points at a small amusement park set up inside the house arranged by Ram making Priya surprised.

When Priya tries to tell Pihu that it was Ram who did everything, Ram stops her and lets Priya take the credit for the whole thing.

After Ram says that he is happy to see Pihu smiling, Priya feels peaceful.

Priya and Pihu enjoy the rides together while Ram stares at them while smiling unconsciously.

Shubham calls Sandy and forces himself to intrude on their discussion by proposing to come there.

Riding the merry-go-round, Priya asks Pihu to be friends with Ram as he is the one who arranged the rides for her.

Pihu reluctantly calls Ram to join her while Priya leaves Ram and Pihu together alone.

However, Ram hesitates about riding the merry-go-round as he has severe motion sickness.

© Copyright tellybest.com, 2022, 2023. All Rights Reserved. Unauthorized use and/or duplication of any material from tellybest.com without written permission is strictly prohibited.
Cached Saved on: Wednesday 25th of January 2023 05:35:01 PMCached Disp on: Thursday 9th of February 2023 07:27:08 AM