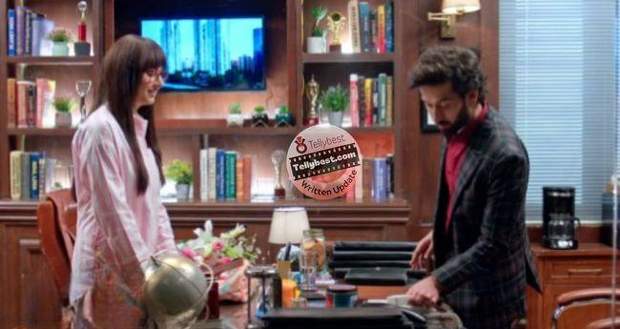 Today's Bade Ache Lagte Hain 2 18th November 2022 episode starts with Ram thinking about Lovely as she messages him whenever he feels lonely.

Turning off the lights, he tries to sleep and gets a nightmare in which Priya tells him I love you.

He wakes up with a jolt and says that this woman comes to his dreams often but her face is not visible.

The next day at Sood House, Priya gets ready for her first day at the job but is not able to find her glasses.

Sarah jokes that it's stuck to her hair and while removing it, the front bangs portion of Priya's wig lands on Sarah's head.

Meera who is cooking lunch for Priya laughs while Sarah warns Priya to be extra careful.

Pihu secretly listens to all of this while Priya asks Meera why she is packing all this.

Meera tells her that she wants Ram to taste her food so these mementoes help him gain his memories.

Meanwhile, Nandini asks Ram to spend more time with Vedika since she is disturbed after getting separated from Sashi.

Ram says he is not an opportunist and instead asks Nandini whether something terrible happened before the accident.

Nandini begins to sweat as Ram states he is feeling like he is living a lie.

Just then, Vedika enters Ram's room & Nandini asks her to put someone known as his PA after Ram leaves.

Outside the elevator, Ram and Lovely (Priya) bump into each other.

Lovely tells Ram that she likes to be an early bird as both of them awkwardly get out of the lift.

She gives him her handkerchief to remove sweat from his face as they both enter his office.

Meanwhile, Pihu is out shopping for some flowers with Krish as she wants to send them to Ram via Priya.

However, Vedika enters their conversation and asks how it is possible since Ram doesn't remember her.

Later, Ram is munching on junk as Lovely reminds him of his schedule today and says every meeting has a lunch or a food item.

Ram asks her why she keeps scrunching her nose up.

She then suggests he can eat her mother's ghee Upma.

On the other hand, Vedika taunts Krish for being Priya's shoulder to cry on and buying cheap roses for a cheap girl like her.

Krish pities Vedika and asks her if she has ever loved Ram because if she did, she wouldn't forget that Ram cannot love anyone except Priya.

Krish ultimately tells her to get lost.

Meanwhile, Adi asks Priya what her name is but she doesn't meet his eyes.

She introduces herself as Lovely when Shubham asks her whether he can meet Ram or not.

She reminds him to knock while Adi gets shocked at her audacity.

When the door is open, Priya opens her lunchbox and Ram follows the aroma and asks her if he can eat it.

She happily gives it to him while Aditya asks her to relax and just be nervous around Vedika, not anyone else.

Vedika then taps Aditya's shoulders as he jumps on his spot.

© Copyright tellybest.com, 2022, 2023. All Rights Reserved. Unauthorized use and/or duplication of any material from tellybest.com without written permission is strictly prohibited.
Cached Saved on: Monday 21st of November 2022 12:51:59 AMCached Disp on: Wednesday 7th of December 2022 03:03:00 PM