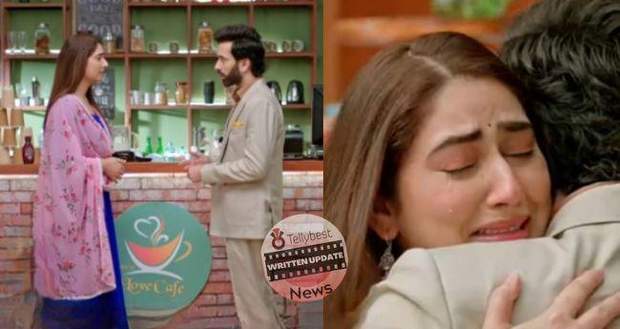 Further, Ram asks Priya to be stronger to face the judge lady as he wipes her tears off.

Just then, Krish comes as Ram had called him.

Krish reveals that someone spiked Ishaan's drink and it was Vedika in front of whom Ishaan revealed Shivina's truth.

Krish also tells that Kanika helped Vedika threaten Ishaan after which he went to the police station fearfully.

Ram feels sorry for what Eshan had to go through while Krish says Vedika doesn't want RaYa to be together.

However, Krish has no proof in Pihu's case but Ram believes it must be Vedika only since her Ishaan plan failed.

Nandini expresses her fear of Priya stealing Ram away from all of them and says they must use Pihu now.

She then asks Vedika to write a small message on the greeting card as Pihu likes small gestures.

However, through this, Nandini wants to expose Vedika's handwriting but water gets spilled on the card accidentally.

Nandini scolds Vedika in front of Ram who just enters the house.

Ram grabs their attention by coughing while Nandini leaves the spot, pretending to be upset by Vedika's action.

However, Ram's eyes catch the remaining portion of the card as Vedika's handwriting is still visible.

On the other hand, Ishaan gets on his knees in front of Priya for confessing everything to Ram.

Priya asks him not to cry and focus on his future instead.

At Kapoor Mansion, Nandini expects Ram to get angry for ruining Pihu's card but he doesn't and smiles instead.

Ram then asks Vedika to make the judge lady believe that Pihu is taken good care of while Nandini leaves angrily.

Later, Ram takes Priya on the video call as he wakes Pihu up.

Pihu is sad while Ram tries to cheer up & bitches about Priya intentionally.

After knowing that the Judge lady is coming, Pihu asks Ram not to talk badly about Ms. Sood.

After Pihu goes to change, Ram assures Priya that everything will be better soon while Vedika eavesdrop on his conversation.

Meanwhile, Priya drives to a place with Krish to gather evidence against Nandini while a stranger takes a video of them secretly.

© Copyright tellybest.com, 2022, 2023. All Rights Reserved. Unauthorized use and/or duplication of any material from tellybest.com without written permission is strictly prohibited.
Cached Saved on: Monday 21st of November 2022 06:04:16 AMCached Disp on: Thursday 1st of December 2022 12:36:42 PM