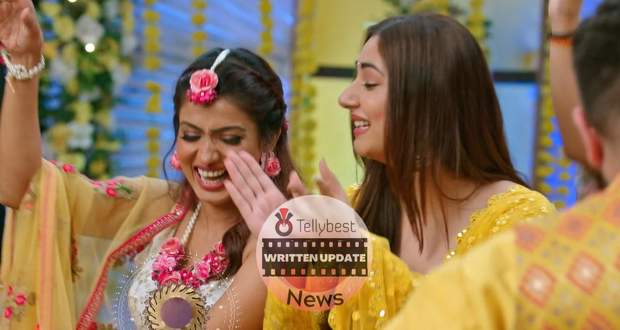 Today's Bade Ache Lagte Hain 2 19th August 2022 episode starts with everyone suggesting Nandini take the injection as it is necessary for her health.

Vedika tries to handle the situation but Priya asks her to stay out of it as this is a family matter.

As Priya swiftly persuades Ram to support her in giving Nandini the injection, Ram asks Nandini to stop refusing.

Nandini tries to refuse several times but finally, the doctor injects her with medicine.

After leaving Nandini to rest in her room, Priya comes out to talk to Krish who says that he has to tell her something.

However, after hearing that Priya is planning to expose Nandini’s scheme of faking her illness, Krish decides to handle Ishaan’s matter by himself.

All the ladies of the Sood family gather to prepare Sarah for the wedding and Meera begins to get emotional.

Meera says that it was because of her that Priya’s life was destroyed and she regrets her actions to this date.

After Pihu comes there, Priya introduces Meera as Pihu’s maternal grandmother to Pihu for the first time.

However, the happy moment gets ruined as Kanika and Vedika step inside the room and mock all of them for their acting performance.

Ram comes there and asks Priya to come with him as he has something to talk about with her but gets teased by Maitri and Sandy for flirting.

While getting ready, Priya asks Ram what he wanted to talk with her about but Ram does not give a definite answer.

Meanwhile, Brinda gives the pharmacist the DNA samples of both Ram and Pihu and asks him to get the result as the earliest.

Ram tells Aditya that he does not want Pihu to leave the house as he likes being around her.

However, as Kanika tells Ram and Aditya that she saw Priya and Krish having a secret conversation, Ram changes his mind.

Priya and Pihu search for Sarah’s sandals and reach Nandini’s room where they bump into Vedika and Shubham.

After sending Pihu away, Priya confronts them and warns them not to mess with her loved ones or else she will not let the deal be signed.

Just then, Ram appears from behind Priya and starts to clap in amazement.

© Copyright tellybest.com, 2020, 2021. All Rights Reserved. Unauthorized use and/or duplication of any material from tellybest.com without written permission is strictly prohibited.
Cached Saved on: Friday 30th of September 2022 06:41:45 PMCached Disp on: Saturday 1st of October 2022 01:31:54 AM