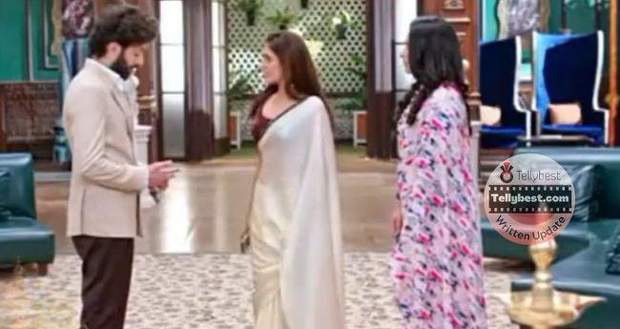 Today's Bade Ache Lagte Hain 2 19th December 2022 episode starts with Ram telling Priya that she has buttoned his kurta and she realizes that she had been holding him for long.

Priya scolds Ram lightly for messing his room with lots of clothes after which he says she acts as if she is his wife.

Priya then says it is wrong of him to say this since she is married and loves her husband dearly.

Just then, Nandini arrives in the room and gets exasperated to see Priya hover around Ram.

Ram informs Nandini that Lovely has already prepared the script to be said in front of the press and leaves.

Priya looks at Nandini smugly and says karma is about to bite her back since Ram loves to be with people he supposedly forgot, not with the one he remembers.

Downstairs, Aditya & Vikrant read the script and questions Ram whether Nandini is going to read it or not.

To be in Ram's good books, Shubham tells Ram that Nandini will say it.

Vedika notices the gestures and the gazes exchanged by Ram and Priya and confront him about the public humiliation he is going to give her today.

Ram doesn't pay any heed to Vedika while Nandini gets shocked to read the script.

She says this is too much but Ram tells her why would he speak this since Shubham is more to her than Ram.

Nandini denies it and gets ready to speak in front of the press.

Nandini reads the script and tells the press that Ram is not going to marry Vedika since she thought of his emotional support as love.

Vedika's jaw falls as Nandini reads out the lines, stating Vedika is mentally weak right now and Ram didn't want to break her heart, so he accepted the proposal in front of everyone.

Ram sees Priya smiling and mentally speaks that this is why he is doing this and promises to bring many more smiles to her face.

Vikrant dismisses the media after which Ram praises Lovely for her clear-cut speech.

Just then, Pihu comes to Kapoor Mansion with Meera & Sarah and hugs Ram.

When the Puja begins, Ram asks Vedika to sit aside so Priya can sit in her place as Pihu sits by his left.

Ram gets emotional and speaks to Swati's (his biological mother) photo that he hasn't forgotten her upbringing and will try to pass every test put in his way for his family that includes Priya & Pihu.

On the other hand, Sid goes to Yash Khanna for the deal, using Ram's name whose housemaid is unpredictably Swati.

After the Puja is done, Nandini tells Lovely to go back home as Vedika is here and Lovely just belongs to his office.

Vedika supports Nandini and hands out cash to Lovely for her extra work, however, Ram scolds her and says Lovely is his guest and not an employee here.

Ram then sends Pihu away with Sarah while Vedika's nostrils flare as she asks Ram why he is doing so much for just an assistant when she threatened Nandini with the contract signed between him and her.

Priya tries to justify herself, but Nandini interrupts and tries to instigate Ram as always.

However, Ram shuts both Nandini & Vedika's mouths by saying he loves Lovely!

Everyone gets shocked while Priya gets tears in her eyes.

Ram turns to her & says he shouldn't have blurted this out in front of everyone.

Meera smiles as Ram confesses he is still Lovely's boss but he feels pulled toward her and thanks her for coming into his life.

The Bade Acche Lagte Hain track plays in the background as Nandini goes into denial, saying why Ram had to fall in love with Priya again.