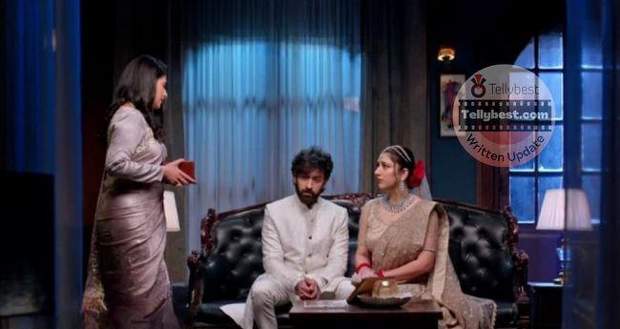 Priya lets out the starting sound marvelously by hollowing her cheeks and making her lips pout.

Ram joins them soon and pinches Pihu's cheeks who just wants the best for her parents.

After their sweet little singing is over, Priya internally speaks to herself that now she has managed to bring a smile to Ram's face, all she has to do is keep him away from the people who suck his blood (Nandini, Shubham).

Just then, Brinda tells Pihu to come with her as now that RaYa is married, they need to spend some alone time. Priya doesn't understand Brinda's hint so Pihu looks at Priya for her permission.

Priya says Pihu can stay with her but Ram stutters no, confusing Pihu.

Pihu asks them to make a decision and Sarah makes it easy for Pihu to say yes as she lures her due to sweets, samosas, and a party.

After bidding Pihu goodbye who goes with Sarah, Brinda, etc, Ram takes Priya into their bedroom.

Meanwhile, Sid fumes in anger as Yash says that Ram will forgive Lakhan since he is his blood brother.

Shubham counters Yash and says Ram has only one brother and that is him.

However, Yash tells Shubham that if Ram can forgive so many mistakes done by him, he can easily forgive Lakhan who is related to him by blood.

Sid states that he will marry Avani tomorrow as he realizes that Yash might turn his back on his word.

On the other hand, Ram and Priya stand together, in front of their bed filled with rose petals.

Hand in hand, both of them laugh as they remember their first few days of marriage.

Priya teases Ram to say a lengthy speech and appreciates her.

At the end of the speech, Priya gives Ram full marks who just smiles goofily and says Priya is now Mrs. Priya Ram Kapoor from Bandra.

Ram also asks her to bring milk since on their first night, he couldn't make this unusual request.

Priya goes downstairs and asks Pavan to warm up some milk when Nandini calls Swati to meet her near the bus station.

Nandini hides behind a pillar after spotting Priya.

Priya takes the milk to Ram who says he doesn't want to drink it now.

Scolding him like a little baby, Priya makes Ram gulp all the milk who says everyone should learn how to ruin a romance from Priya Ram Kapoor.

Meanwhile, Lakhan gets an ultimatum from Yash that if he wants to marry Avani, he should get accepted by Ram publicly.

Meanwhile, Ram takes Priya in the early morning to the cafe they met for the first time.

However, they stop midway and talk to each other and Nandini sees them.

She calls Swati who is an auto rickshaw and asks her to meet near the police station now.

Swati ignores Ram due to Nandini while Ram feels Swati did it deliberately.

Priya gets concerned when Ram gets a call from Lakhan also who wants to talk about Avni but Ram misunderstands his intention.

He shouts at Lakhan that he shouldn't call him since he has only one brother and that is Shubham and Swati died the day for him when she decided to hide her existence forever from him.