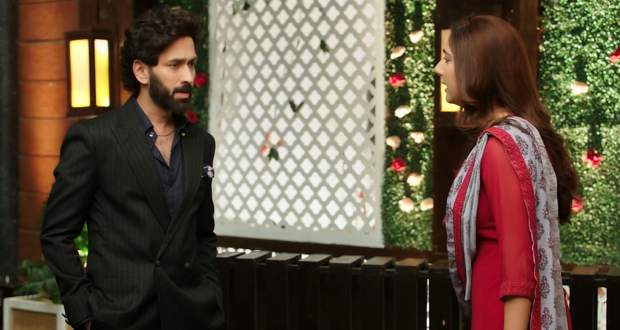 Sarah calls Priya and tells her about her and Vikrant’s sangeet ceremony getting organized in Meerut.

Trying to persuade Priya, Sarah asks if she and Pihu can also come there as the minister is invited to the function.

Priya thinks for some time but on hearing everyone requesting her to come with Pihu, she agrees to Sarah’s proposal.

On being asked about catering suggestions, Priya tells Sarah that she knows a woman named Pallavi who runs a café in Meerut.

Priya narrates a story from the past where Pallavi fed Pihu free of cost because Priya did not have money to buy food.

Hearing that, Vikrant decides that he will hire Pallavi only and manage Ram into agreeing with his decision.

Priya tells everyone on the phone how Ram and Pihu are riding together on the merry-go-round.

However, Brinda asks Priya to immediately stop Ram from riding as he has motion sickness and will start vomiting in no time.

Meanwhile, Pihu starts talking about her hobbies and Priya while Ram starts to feel nauseous.

Ram asks Pihu to stop the ride but Pihu does not listen to him as she is enjoying the ride more than anything.

Priya comes and stops the ride and asks Ram to get down but Pihu holds onto him asking Ram to stay.

After a tussle, Ram gets off the ride while Priya scolds Pihu for making fun of Ram’s sickness.

Pihu apologizes to Priya for behaving in such a way and goes to fetch some ice for Ram.

Meanwhile, Shubham arrives at Meera’s house and refuses to hire Pallavi as the caterer for the sangeet function.

Ishaan gets agitated on hearing Shubham talking about Priya going to jail and bursts out in anger.

However, Sarah stops Ishaan while Sandy convinces Shubham to hire Pallavi as the caterer.

Vikrant and Sarah talk with Pallavi over a video call and seal the deal.

At the same time, Pihu discovers handcuffs and a plastic knife in Ram’s drawer and thinks that Ram wants to kidnap her and Priya.

Pihu acts very sweetly toward Ram suddenly and takes him with her to play the magic game.

Asking Ram to sit while closing his eyes, Pihu walks away in preparation for her mission to protect her and Priya.

© Copyright tellybest.com, 2020, 2021. All Rights Reserved. Unauthorized use and/or duplication of any material from tellybest.com without written permission is strictly prohibited.
Cached Saved on: Friday 30th of September 2022 10:59:38 PMCached Disp on: Saturday 1st of October 2022 12:10:44 AM