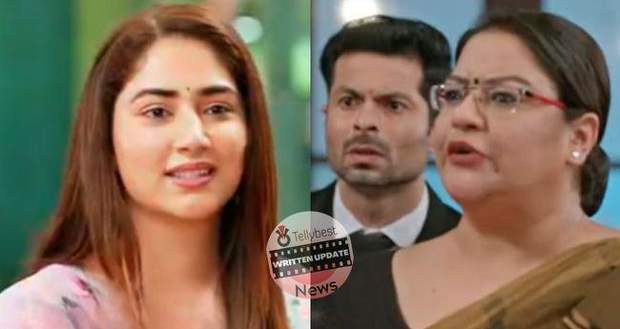 Nandini leaves the room, hoping that Ram will call her back but he doesn't.

Meanwhile, Priya calls Kanika at Lover's Cafe along with Krish and asks her to confess but she says she will not listen to her.

However, Priya urges her to come to the party and take Vedika's name for Pihu's sake.

Kanika leaves angrily but she doesn't say a yes or a no.

Priya tells Krish that the time has come to take a decision and let truth win over evil.

Krish tries to calm down Priya by putting his hands over her shoulders while Vedika records them secretly to make it look like they are conversing like lovers.

At Kapoor Mansion, Nandini draws a fake drawing of a female figure standing behind a bar to make it look like it is drawn by Pihu.

She then tells Shubham she will show this to the Judge lady so Pihu can go to a foster home if no one gets custody.

The foster care thing doesn't sit well with Shubham while Nandini is dreaming of the success of her plan.

In the evening, Vedika shows the photo taken by her of Krish & Priya to Nandini.

She then tells Ram she is waiting for Priya, otherwise, the judge will get angry.

Ram then assures Pihu that Priya will come while he gives her a gift to take care of.

Vedika tries to take it but Ram stops her & asks to look over the gift from the distance.

Just then, an upset-looking Priya enters the Kapoor Mansion along with Meera & Ishaan.

Priya asks Pihu to talk to her but she hugs Nandini instead.

The judge lady also arrives and Ram asks her to give them some family time to cheer Pihu up.

Aditya pretends to play music while Ram dances with Priya.

All the other family members join them to make Pihu smile as Ram does a silly dance step and strokes Pihu's cheeks.

Nandini & Shubham join the dance as well and throws the drawing in the Judge's lap secretly.

The judge gets angry and asks them to stop this fake party.

Ram gets confused as Pihu was making a drawing of a happy family, not of Priya inside the jail.

The judge says that Pihu deserves counseling right now instead of all the loud music.

Priya tries to explain herself stating, they were just trying to cheer Pihu up with this party.

Meera tells the judge that both Ram & Priya married each other because of their family.

Priya then tells the judge she was scared of losing Pihu, which is why she didn't divulge the jail information prior.

Pihu stands with Nandini as Priya emotionally says that there is no bigger happiness for her than being Pihu's Mumma.

© Copyright tellybest.com, 2022, 2023. All Rights Reserved. Unauthorized use and/or duplication of any material from tellybest.com without written permission is strictly prohibited.
Cached Saved on: Monday 21st of November 2022 06:13:05 AMCached Disp on: Wednesday 7th of December 2022 04:08:32 PM