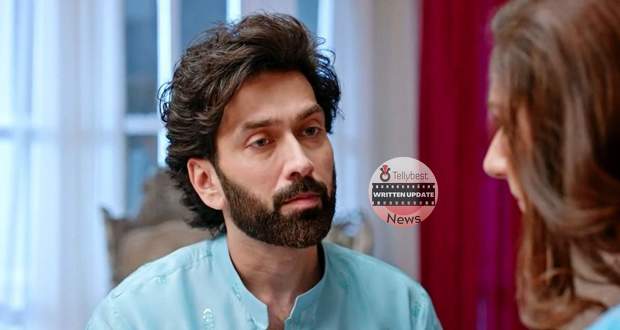 Today's Bade Ache Lagte Hain 2 19th September 2022 episode starts with Ram telling Nandini what she did along with Vedika was wrong.

Ram declares that he and Priya will not let anyone decide on their behalf when it concerns Pihu.

He further asks Nandini to understand it since she is a mother herself.

However, Ram is not finished talking and also asks Nandini, Vedika, and Shubham to apologize to Priya who is a mother herself.

Meanwhile, Priya inwardly tells herself not to doubt Mr. Kapoor anymore, otherwise, she would have taken a very wrong step that would result in many more misunderstandings.

At night, Priya searches for some jobs on her laptop, saying she cannot stay too long in Kapoor Mansion.

Just then, she gets a call from Krish who tells Priya he is sorry to suggest she run away.

However, Priya says this was necessary otherwise she wouldn’t trust Ram fully now.

Priya then tells Krish she has to reveal it to Pihu where she was for two years.

Meanwhile, little Priya AKA Pihu joins Ram while he is drinking alcohol.

She says she doesn’t like when Ms. Sood disappears while Ram thinks of ways to hide the glass full of whiskey.

Getting excited, Pihu asks Ram if she can have a taste since Priya says juices are healthy.

Ram tries to balance the glass in his hand while Pihu tries to reach up to it.

On the other hand, Nandini is burning in her defeat and asks Vedika to dress up like Priya and run away with Pihu.

However, Vedika says it is only her who gets thrown under the bus by both Shubham and Nandini.

Nandini says she will mix her sleeping pills in Ram’s drink so he sleeps deeply and Vedika can execute Nandini’s plan.

Meanwhile, Pihu drops peanuts in Ram’s mouth and they both have fun.

When Ram goes to attend a work call, Priya comes with muffins in her hand.

However, Pihu drops peanuts in Priya’s mouth too playfully and Priya coughs.

When Ram sees this, he gets nervous and says he cannot act romantic with Priya in front of Pihu.

Meanwhile, Vedika exchanges lemon juice with the spiked alcohol drink and asks Tarun to give it to Ram.

On the other hand, Ram asks Pihu to bring peanuts for Priya whereas Priya acts funny and calls Ram ‘Mr. Boring’.

After Pihu leaves the room, Ram falls on Priya and her fingers reach to touch his cheek as she remembers her romantic moments with him.

© Copyright tellybest.com, 2020, 2021. All Rights Reserved. Unauthorized use and/or duplication of any material from tellybest.com without written permission is strictly prohibited.
Cached Saved on: Saturday 1st of October 2022 11:18:35 PM