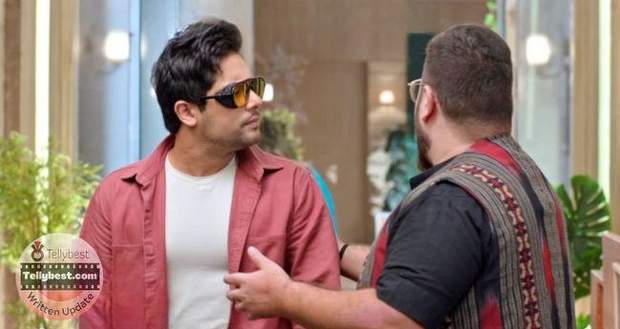 Ram discuss with Aditya & Vikrant that he needs to get strict with Shubham and will talk to Nandini after her mobile switches on again.

Meanwhile, Shubham gets agitated with the things going on while Siddharth asks him to talk to Nandini and she will take care of things.

Shubham angrily states that it is happening because of Lovely whom Ram is keeping as his PA despite knowing Nandini doesn't like her.

Further, Pihu meets Ram inside his office where she tells him the synopsis of her play, a scene from Ramayan, for which she asks Ram to play the role of Shri Ram.

On the other hand, Aditya & Vikrant appreciate Priya for how she handled the situation well and developed a new bond with Ram.

Vikrant tells Priya that she has made Ram differentiate between right & wrong as Ram is a man of ethics but when it comes to family, he cannot think of them as bad.

Priya says that she has sent Pihu to make Ram agree to play the role of Shri Ram in the skit while Ram wonders about Pihu's proposal about being the lead in the skit.

Ram denies Pihu that he cannot play the role and Priya enters the office chiding Pihu to not force him and then takes Pihu outside with herself.

On the other hand, Siddharth goes to check up on Lovely Singh's profile and sends a voice message to Nandini asking her to intervene as Ram is going against them.

Nandini, upon hearing the voice message, suspects Priya to be responsible for manipulating Ram's thoughts and asks the driver to go to the Sood house.

Meanwhile, at the office, Ram gives the contract papers to Lovely in her cabin and Lovely takes them from him, standing up with him.

Pihu childishly wraps the lace in her hand (which she had for her costume) around both Ram and Priya locking them in it and running away later.

Ram and Lovely being unaware continue to talk and Ram asks her if it will be right for him to get strict with Shubham while Lovely assures him that it is completely fine and he deserves the respect from Shubham like any other elder brother.

As Lovely refers to Shubham as Ram's step-brother, he gets offended and turns which makes Lovely jolt forward and hold Ram by his shoulders for his support.

As the two of them realize their position, Ram apologizes to Lovely and unwraps them out of the lace.

Meanwhile, Nandini arrives at Sood's house with Vedika where Meera meets them and welcomes them at her place.

Nandini starts badmouthing Priya and says that their dreams of reuniting Ram and Priya will never be fulfilled for which Meera's reply shuts her mouth up.

© Copyright tellybest.com, 2022, 2023. All Rights Reserved. Unauthorized use and/or duplication of any material from tellybest.com without written permission is strictly prohibited.
Cached Saved on: Wednesday 25th of January 2023 12:16:22 PMCached Disp on: Wednesday 1st of February 2023 07:06:41 PM