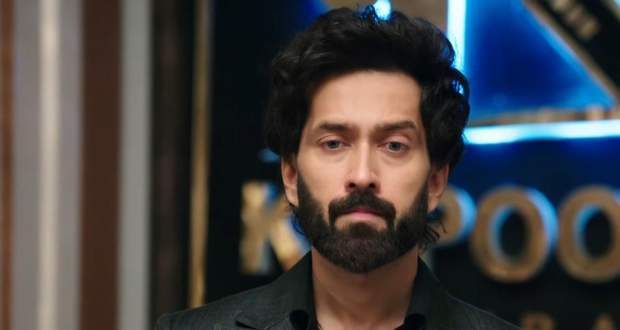 Today's Bade Ache Lagte Hain 2 1st July 2022 episode starts with Krish telling Ram that it is for Pihu’s sake he has come to talk with Ram.

Ram acts cold and says that it is not his problem that Pihu is not aware of Priya’s truth.

While criticizing Ram’s bitterness, Krish tells Ram that it is his office’s proxy server from where the video got uploaded.

Ram gets stunned to hear that while Krish warns him to come back with the police next time.

As soon as Krish leaves the house, Nandini turns to Aditya and Vikrant and accuses them of their involvement with the whole issue.

Ram denies believing Nandini and stresses that they are his best friends and will never do anything against his will.

However, Nandini tells Ram that his friends have been plotting to reunite him and Priya this entire time.

Nandini directs her blame radar toward Vikrant and says he planned Priya’s visit to the restaurant with the help of Sarah.

Getting a chance to isolate Ram from his friends, Nandini asks Aditya and Vikrant to get out of their family and professional life.

Meanwhile, Ishaan confesses to Krish that he is the one who did the whole thing because he wants to reunite Ram and Priya.

Ram urges Aditya and Vikrant to say something in their defense but instead, Shubham appears and blurts out the entire truth.

Shubham tells Ram how they got their hands on the video and made it viral so that he has to get together with Priya and act as a couple.

However, as Nandini commands Aditya and Vikrant to get out of the house, Shubham comes in and says that it was his plan to make the video viral.

Nandini is shocked to hear that while Shubham explains to Ram that getting together with Priya is a better option.

Shubham suggests Ram uses Pihu as a weapon to cover up his image in front of the general public.

As Ram objects to Priya being married to Krish, Shubham discloses that Priya and Krish are not married and have not even lived together.

With various suggestions coming in, Ram shuts up everyone and goes to the minister by himself after receiving the notice of cancellation of the deal.

Ram challenges the minister that he will clear up his image in such a way that the minister will not have any other option except to accept the deal.

© Copyright tellybest.com, 2020, 2021. All Rights Reserved. Unauthorized use and/or duplication of any material from tellybest.com without written permission is strictly prohibited.
Cached Saved on: Monday 1st of August 2022 12:55:53 AMCached Disp on: Thursday 11th of August 2022 10:59:28 PM