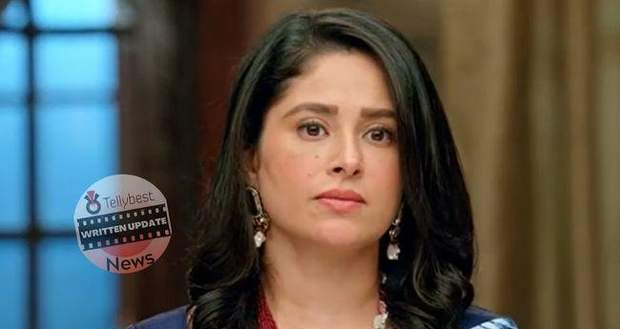 Before he starts his overthinking, he receives Priya's video call where she asks him why he didn't tell her about Shubham & Nandini going to the farmhouse.

She suggests he postpone the wedding since she doesn't feel nice seeing him sad.

When Ram smiles, Priya confesses that she loves him very much, leaving Ram awestruck.

She also tells him that this won't be easy but Ram is sure as long as Priya is with him, everything is possible.

Before cutting the call, Ram tells I love you too to Priya, making her mood light up.

Just then, Priya's eyes glance at the transfer of ownership papers that Nandini meant to exchange with the trust fund papers.

She gets worried & tells Meera Ma to go to Kapoor Mansion and be with Ram since he is alone.

Meera does exactly like this and dresses Ram as her son.

She asks him why he hasn't told Nandini or Shubham about his decision of giving everything to them on call.

Ram asks Meera if she thinks Nandini & Shubham are doing this for money while Meera says she just wants Ram to choose the best option.

Meanwhile, a bridal dressed-up Priya goes to the farmhouse where Nandini & Shubham are staying.

She threatens them by saying they will be left penniless since she won't allow Ram to give anything to them.

Nandini's face falls when Priya asks Shubham if he fit the firecrackers inside Pihu's dollhouse.

Further, Priya shows them the transfer of ownership papers and says she will go to any length now to protect Ram's innocence from Shubham & Nandini's vulture nature.

Meanwhile, following Meera's advice, Ram emotionally voice records a message for Nandini, stating he never saw her as his stepmother and is ready to give everything that he calls his.

On the other hand, Vedika comes and an unconscious Priya lies on the bed.

Vedika tells Nandini to help her as well because if Ram finds out about the papers, he will not hesitate to throw them out of the company.

At Kapoor Mansion, everyone arrives except Priya & Pihu.

Ram asks Vikrant if he is doing a prank on him but Sarah says when they left the house, Priya & Pihu were not inside their room.

So they thought, she must have gone to Kapoor Mansion herself.

The Pandit also asks where the bride is when suddenly Nandini & Shubham arrives in the Mandap, telling Ram that Priya is gone.

A flashback is shown in which Vedika's men have blindfolded Pihu & bringing her into Priya's room.

Nandini feels it is wrong and asks Vedika not to use Pihu since she is very young.

However, Vedika's point is that Pihu is the only weakness of Priya and they have to use her against Ram since Ram is smitten by Priya.

She asks Vedika to drop Pihu back home because if Ram finds out this, he will not spare anyone in his protective daddy mode.

© Copyright tellybest.com, 2022, 2023. All Rights Reserved. Unauthorized use and/or duplication of any material from tellybest.com without written permission is strictly prohibited.
Cached Saved on: Monday 21st of November 2022 04:59:31 AMCached Disp on: Thursday 1st of December 2022 12:11:25 PM