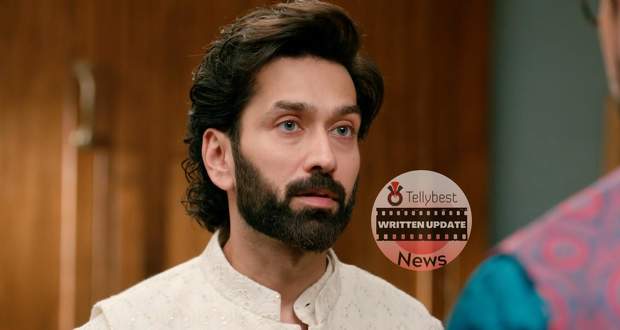 He is greeted by an enthusiastic Pihu who asks him whether he has talked with Ms. Sood or not.

Ram’s mind replays all the moments Ram got to spend with Pihu as Mr. Khadoos but never as Pihu’s Dad.

He covers his mouth to stifle his cry and bends down to Pihu’s height.

Pihu gets sad to see Ram emotional and says a huggie will cure him.

She hugs him and Ram tells Pihu it is the best hug he has ever got.

Meanwhile, Meera gets panicked when Priya declares her decision not to tell Ram about Pihu.

Krish notices the uneasiness on Priya’s face and says he has to find out the reason why Priya is still hiding the truth from Ram.

On the other hand, Brinda asks Aditya if he collected the DNA report.

Aditya thought Brinda was sick but he gets happy when he finds out that Pihu is Ram’s daughter.

However, Brinda is curious to find out why Priya presented herself as lowly to Ram and hid Pihu for five years.

At night, Ram stays awake until Pihu is awake. He cries to himself thinking that he gets to call Pihu his own.

He pities himself for wanting to apologize to Krish for taking Pihu away since he thought Pihu was Krish and Priya’s love child.

However, Ram realizes Priya only loved him but he curses himself for believing Priya’s lies.

On the other hand, Neelam and Vedika cheer on alcohol thinking Priya will break down after Ishaan goes to jail.

Meanwhile, Krish asks Priya the reason she is taking Pihu away from Ram when they are already bonded so well.

Priya says she cannot handle the negativity in Kapoor House and does not want Pihu to go through the negativity as Nandini will never want RaYa to be together.

Since Kanika is still a shady character, Nandini goes to the Minister’s House and apologizes to him, saying Priya blamed Kanika for being all over Ram outside the temple.

The minister gets shocked while Kanika defends herself, and reveals that she is not a liar.

Instead, Nandini, Priya, and Ram are liars for pretending to be a family.

The minister almost cancels the deal but Priya comes in between.

She shows the minister a video clip of Kanika getting touchy with Ram while Nandini gets a shock wave.

Priya tells the Minister he can cancel the deal but if he ruins Ram’s reputation, she will out Kanika’s video.

The minister obliges Priya’s request to let things be the way they are while Nandini glares at Priya.

Priya then finds Ram with lots of girls. She gets hurt while Ram says since the deal is done, Priya should deserve money for her brilliant acting.

He hands Priya a blank cheque and says the innocent Ram Kapoor has died since he has no family, and no wife.