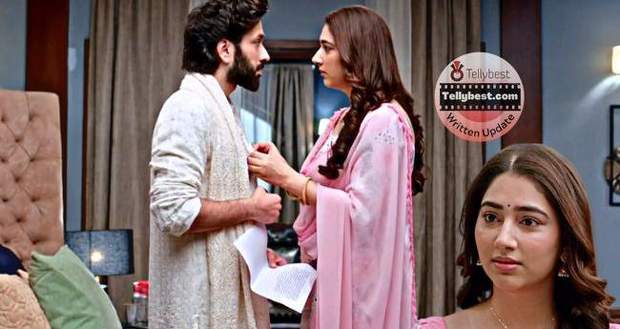 Today's Bade Ache Lagte Hain 2 20th December 2022 episode starts with Ram confessing his love for Lovely in front of everyone.

He praises Lovely for the qualities she harbors like distaste for money, and valuing family, unlike the rest of the world.

Nandini widens her eyes as Ram's comment strikes her along with Vedika who panics when Ram turns to look at Priya and says 'I love you again.'

Vedika lashes out at Priya, saying she did what she wanted by becoming Lovely.

Before Vedika blurts out anything in anger, Nandini grabs her by the elbow and shouts at Shubham to calm her down.

Ram realizes why Nandini intervened so Vedika doesn't blurt out her truth as well.

Meanwhile, Priya's expression sinks as she mentally speaks that Ram has feelings for Lovely, not her, and faints.

Ram screams for Vikrant to call the doctor as he holds a pregnant Priya in his arms.

At Yash Khanna's house, he talks with his wife about asking Sid to marry their daughter, Avni, and asks Swati what she thinks about it.

Yash's wife praises Ram and states she is so excited to meet him.

She then tells Swati who is peeling the fruits standing near the dinner table that when she meets Ram, he will remind her of her soon.

The knife slices Swati's hand at this statement as she sucks on the oozing blood.

On the other hand, Ram and Pihu sit on either side of Priya who is unconscious on Ram's bed.

A lady doctor comes to check on Priya and asks Ram if Lovely is taking any medication or not.

Sarah stiffens and whispers to Meera that it is Priya's folic acid tablets and Nandini notices both of their panicked expression.

Ram realizes that Priya's pregnancy should not come out and urges the doctor not to prescribe anything since they do not know what medication Lovely takes.

Nandini scolds Ram and asks him to let the doctor do her thing and grabs Lovely's black purse.

She digs the tablets out and a paper and gives it to Shubham to see what prescription is written.

Ram takes it from Shubham and tells the doctor that they might need to shift Lovely to a hospital as Meera realizes a pregnant lady shouldn't get any injection without past medical history.

Meera requests Ram to let them go and take Lovely as it has been a long day while Sarah interjects, saying these tablets are hers and not Lovely's.

The doctor checks Priya's nerve and says this usually happens when a woman is preg--.

The doctor's word doesn't get finished because Priya wakes up and takes Pihu's name.

Lovely tells Ram that she should get going while Vedika calls Krish into the room, stating Ram shouldn't forget that Lovely is a married woman and should go home with her husband.

Before saying goodbye to Priya, Ram tells Krish to take care of Lovely for his sake.

At Sood House, Meera calms down Priya and says Ram loves her but Sarah says it is not Priya he loves, but Lovely.

However, Krish asks all of them not to worry and let Priya rest.

Meanwhile, seeing Shubham concerned, Sid asks what has happened since they have finally got the meeting with Yash Khanna and it is time to be happy.

Shubham gets shocked at the suggestion but Sid says they have to do this since this deal is a great opportunity to progress further.

Later, Ram asks Aditya to check up on Lovely and hears Sid talk with Shubham about the meeting.

Ram interrupts and lets them know that he has read their file and will meet Yash himself.

Sid gets happy and volunteers to accompany Ram.

At Sood House, Krish and Priya sit down to have a conversation and Priya tells him that Ram seems changed.

Krish agrees and reminds Priya that she won today and Ram's attitude does seem to change because it seemed as if he was talking to Priya, not Lovely.

Priya's smile enlarges when Krish mentions he knows Priya's instincts can never be wrong about Ram.

© Copyright tellybest.com, 2022, 2023. All Rights Reserved. Unauthorized use and/or duplication of any material from tellybest.com without written permission is strictly prohibited.
Cached Saved on: Wednesday 25th of January 2023 04:49:48 PMCached Disp on: Thursday 9th of February 2023 04:53:38 AM