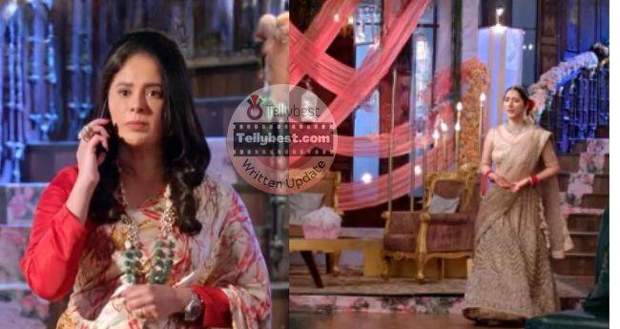 Today's Bade Ache Lagte Hain 2 20th January 2023 episode starts with Ram hanging up Lakhan’s call and telling him not to call him ever again.

Yash asks Lakhan to either forget about Avni or beg for Ram’s forgiveness.

Meanwhile, Ram tells Priya that he is counting his blessings and then takes Priya to the same place where they met for the first time.

Ram bends in front of Priya’s stomach and starts talking to the baby in her womb and then asks Priya to guess the name of their newborn baby girl.

Priya asks Ram how can he be so sure that it is a girl at which Ram says his sixth sense is very strong.

Priya says that why is he so overexcited and should stop acting like a child as unlike Pihu and Ram, she does not like grand gestures and thrill.

Ram teases her and says that Priya is so boring that all she cares about is how many trees are cut in Africa. He then cutely insists Priya guess the name and play along.

Priya says that she knows that Ram wants to name the child Prachi because it was the name of Pihu’s doll.

Ram then takes Priya outside and makes sprinkles fall on her head and starts reliving all their past memories.

Meanwhile, Lakhan is sitting on the roadside drinking alcohol and thinking about Avni and everything that is going on.

Lakhan feels even though he has a big family yet he is alone and destroyed because of Ram.

Sid and Shubham watch Lakhan from a distance and feel happy by looking at his terrible condition.

Back in front of the family court, Nandini blackmails Swati and says that had she forgotten that she can ruin Ram’s life in seconds.

Swati says that Ram hates her and also she has lost everything to Nandini then why is she blackmailing her again and again?

Nandini says that she is a nice woman who saved Ram years ago from a red-blooded murder and takes Swati to the flashback when years ago, Nandini and Virendra were in the office and working.

Nandini gives little Ram a chocolate when he came in with Swati to meet Virendra.

A colleague borrows Virendra’s pen which Ram gifted him and as the colleague leaves the room, Ram spots the pen in his hand and start snatching it away saying that it belongs to his father.

At the same moment, Nandini enters and spills her food on the floor because of which the man slips while pulling the pen from Ram’s hand and falls down the window.

Swati, Nandini, and Ram rush downstairs and find the man dead. Nandini asks Swati to leave and let her deal with the situation.

The next day, Swati visits Nandini and Nandini starts manipulating Swati that Ram killed a man just because he borrowed his father’s men and Nandini is the sole witness to the entire crime.

Nandini says that she will protect Ram at one cost and that for Swati has to leave Virendra and not tell him the real reason but say that she is leaving him for money.

Swati did as Nandini told her to protect Ram.

© Copyright tellybest.com, 2022, 2023. All Rights Reserved. Unauthorized use and/or duplication of any material from tellybest.com without written permission is strictly prohibited.
Cached Saved on: Wednesday 25th of January 2023 08:58:33 AMCached Disp on: Monday 6th of February 2023 04:50:59 AM