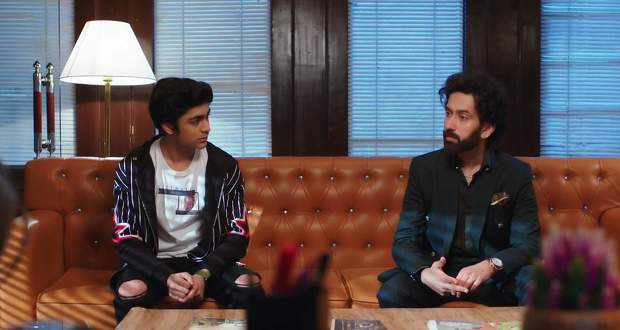 Ishaan gets shocked when he reads that Ishaan wants to break his all ties with Sarah as per the written content on it.

Vedika insists on signing the papers when Ishaan mentions talking to Ram about it.

Further, Vedika collides with Ram outside Ishaan’s room and worries in case Ram catches her doing her misdeed while Ram is feeling guilty for manipulating Ishaan for his sake.

At the party, Nandini and Vedika discuss their plan and how Nandini wants to see the Soods getting humiliated in front of all.

Ram goes to the eating stall where Aditya catches up with him and tells him that the Ram from 5 years is still alive inside him.

The words pinch Ram and he blames Priya for making him the way he is now while the toothpick in his hand pierces inside the skin.

Ram gets hurt but Priya feels the pain. Priya worries about Pihu and Ram crossing paths with each other and decides to bring her back.

Meanwhile, Ram notices Pihu dancing and recognizes her as the girl he met in the mall.

Pihu hides away when she sees Ram coming along her way.

Further, Ishaan enters the party and Ram announces he has a surprise for the couple which comes out more like a shock.

Ishaan sarcastically asks Sarah about the wedding date. Sarah asks Ishaan if they can talk later about this.

Ishaan states that there won’t be a choice afterward as she has to choose either Vikrant or him.

As Sarah stands stunned there, Ishaan starts laughing surprising everybody.

Ishaan reminisces how he had gone to meet Priya who guided him and cleared his mind.

As Ishaan repeats Priya’s words, Ram sensed it and wonders how come Ishaan changed his mind.

Further, Pihu calls Priya while Vedika notices her talking to someone.

© Copyright tellybest.com, 2020, 2021. All Rights Reserved. Unauthorized use and/or duplication of any material from tellybest.com without written permission is strictly prohibited.
Cached Saved on: Saturday 1st of October 2022 11:48:01 PMCached Disp on: Friday 7th of October 2022 08:37:43 PM