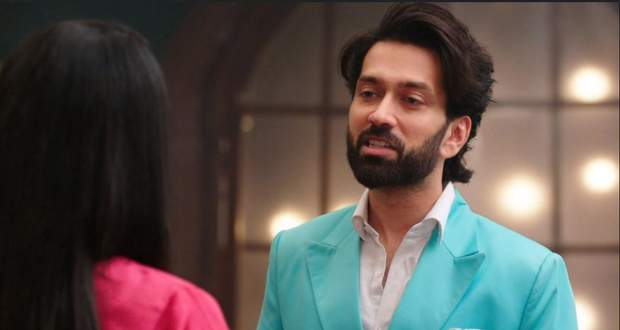 At the same time, Nandini insists on talking to Priya and takes Priya to her room.

On the other hand, as Shivina wants to return to the Kapoor mansion, Shubham tells a plan to her.

Meanwhile, Nandini starts by praising Priya for being a great support for the family.

After lots of wordplays, Nandini manipulates Priya by saying that they'll have to stay under Priya's decision.

So, Priya promises to talk to Ram while Nandini smirks at her victory.

When Priya enters her room, she spots Ram lighting candles in a well-decorated room with cake, flowers, and champagne.

Ram says that it's his father's birthday and usually he celebrates it alone but he would love Priya's company this time.

Though Priya wants to tell Ram about Varun's true face, Ram promises to talk about everything the next day.

When Ram blows the candles, Priya giggles as he has used magic candles that are not blowing off.

Further, Ram feels happy and emotional at the same time.

Firstly, Priya refuses to drink but later accepts it.

Before drinking, Ram teaches the rules of cheers and drinking with locked hands.

Priya makes faces after sipping the champagne but drinks the whole glass.

As Ram wanted, Priya gets drunk while Ram adores her childish behavior.

In her drunk state, Priya accuses Ram to be a vamp as he is creating problems between her and Nandini.

While Priya keeps complaining, Ram feeds the cake to her.

Further, Priya puts a condition to name half of his property after Nandini.

Ram says that Priya can handle everything if something happens to him.

Hearing this, Priya says that she does not want any of his property or company because all she wants is her love, her Ram.