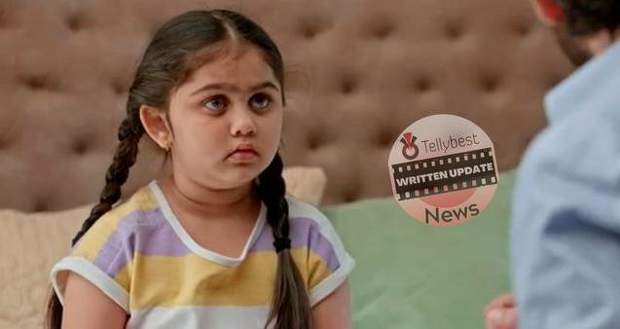 However, Ram states that it is not entirely Priya's fault.

Ram asks Pihu if he and Priya both can have another chance to better themselves.

Pihu says yes as the judge smiles & understands that she was too quick to make conclusions.

Afterward, Pihu tells the judge that she has a gift for her.

However, Vedika puts her foot in front of Pihu intentionally, making her fall.

Vedika quickly whispers to Pihu that if she takes her name, she will send Priya to jail.

Pihu cries as Ram realizes that it is Vedika who pushed her.

Wiping Pihu's tears off, Ram says that Pihu doesn't have to protect anyone in fear and looks at Vedika.

Vedika tries to justify herself as Ram explains to Pihu that she has to learn to fight back in the same language against people who take advantage of her innocence.

Pihu then reveals what Vedika said to her about sending Priya to jail.

Ram then sends Pihu to her room as he confronts Vedika.

Ram screams at Vedika for also keeping chits in Pihu's watch while Priya gets shocked at the sudden revelation.

He then asks her to write her name & address on the paper while Shubham supports Ram, going against Vedika.

Ram tells Vedika to prove herself as Nandini unexpectedly twists the scene.

She scolds Vedika for doing this to Pihu, demanding a truthful answer when Nandini is in the wrong.

Vedika finally accepts her mistake and tells Ram he broke his promise.

However, Nandini doesn't let Ram speak by putting the blame on Vedika for doing this to Pihu as Ram did not marry her.

Ram tells the judge that he & Priya did not fail as parents but in judging people's character.

However, Vedika frames Ram as a womanizer who had an affair with her even after getting married to Priya.

She further states that Ram tried to mishandle Kanika.

Meanwhile, Priya shocks Vedika by calling Kanika into the party who confirms that Vedika asked her to put the fake claims on Ram.

Kanika apologizes to Ram while Priya tells the judge that she even blackmailed Ishaan to go to jail.

Vedika raises her tone at Priya but Ram threatens to call the cops.

Just then, Vedika shows the photo of Priya & Krish together, claiming she is having an affair with Krish.

However, Ram shocks everyone by stating that Priya cannot betray him.

© Copyright tellybest.com, 2022, 2023. All Rights Reserved. Unauthorized use and/or duplication of any material from tellybest.com without written permission is strictly prohibited.
Cached Saved on: Monday 21st of November 2022 05:39:47 AMCached Disp on: Tuesday 29th of November 2022 10:10:27 AM