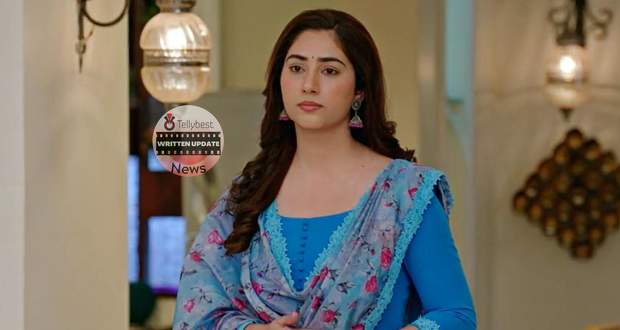 Tarun gets embarrassed seeing Ram and Priya like this and places the whiskey on the table.

Priya gets happy and asks Ram whether the drink is for her or not.

She tries to struggle out of Ram’s grip but she ultimately falls in her arms.

Pihu enters the room with peanuts in her hands while Ram drops Priya on the floor, feeling red in his cheeks.

Priya feels apologetic and blows his eyes and says he has Pihu’s eyes and he is a copycat.

Ram gets irritated and goes to take a sip of the whiskey but Priya snatches it away but it falls on his face.

Ram’s eyes widen in shock while Priya hurriedly dabs his face with napkins.

He feels so in love with Priya again but not to make Priya uncomfortable, Ram puts Priya to sleep.

Meanwhile, Ram inwardly says he wants to get closer to Priya but she might not like it in the morning since things are different now.

In the night, Vedika enters Priya’s room and takes Pihu in her arms.

In the hall, Pihu’s hand accidentally knocks on the vase which creates a lot of noise.

Vedika hurriedly puts a sleeping Pihu in the car while Ram finds Priya’s room all alone.

All of a sudden Priya hits Vedika on her head, saying no one can steal Pihu from Ms. Sood.

Blood oozes out of Vedika’s head while Ram comes out in search of the mother-daughter duo.

Priya in a drunken state almost hits Ram too but Pihu saves him.

Pihu tells Ram she found Mumma beating someone up while Priya feels dazed and confused.

She then suggests going on an adventure, making Ram nervous since he doesn’t know what an adventure means to Pihu and Priya.

Priya blindfolds Ram while he tells Pihu he is scared of her Mumma.

Pihu then narrates a story when Priya and Pihu were homeless but Priya made their condition fun.

Ram gets emotional, thinking about why Priya and Pihu had to go homeless.

Priya then tells Pihu she and Ram were best friends before Pihu was born while Priya falls unconscious.

Ram blames Pihu for playing with the peanuts that struck Priya’s jaw and she drank apple juice.

However, Pihu says Ram is wrong for drinking the bitter medicine that one is not supposed to in front of the kids.

Ram almost says this is not the way to talk to a father but he stops.