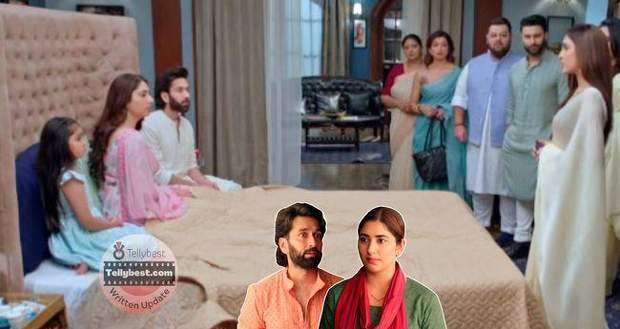 After hearing the bell ring, Swati comes to open the door the moment when Ram gets a call from Adi suddenly.

Ram asks Sid to go inside and attends the call outside and Aditya informs him that he should talk to Lovely instead of sending him.

Ram tells Aditya that he is going to call him back and goes inside to meet Yash and his wife.

The Khanna's shower Ram compliments while Swati dries the utensils with a towel near the dining table.

Meanwhile, Nandini is staring at Ram's photograph in deep contemplation and breaks it when Vedika disturbs her reverie.

Nandini reveals that she is never going to involve Vedika in her plan now since she always ruins it.

Seeing the rude exchange happen between her and Vedika, Shubham mentally says that he is grateful not to get involved with them this time.

Nandini smirks, saying the past will repeat itself and the same thing is going to happen to Priya that happened to Swati.

Meanwhile, Aditya calls Ram this time but on a video call, revealing that the Sood House is all empty and a letter has been left written by Priya saying she is scared that "they" will hurt Pihu.

Aditya also shows Ram the fuljhadi made at the end which is his & Pihu's secret code and gets panicked.

The keys from his fingers fall off while Swati internally wishes that God help him in crossing all his hurdles.

He picks up the keys hurriedly and Swati lightly touches his head with her back turned to him and blesses him.

Ram leaves, letting Sid talk with the Khannas, and arrives at Sood House where Sarah, Meera, and Vikrant also don't know where Lovely is.

Ram panics and thinks of telling Adi and Vikrant that he remembers Priya but he doesn't.

Ram asks both of them to track Nandini and Vedika's phones just in case they did something as he takes out his car to find Priya & Pihu.

On the other hand, Swati is in her room and cries staring at Ram's photograph.

She asks God through the tears when her punishment will end as she can't even come in front of Ram to console him since he thinks she has been dead for years.

Meanwhile, Brinda informs Ram that an old person saw Priya and Pihu near the cafe and guides them toward a godown.

Upon reaching the godown, Ram panics after he sees the necklace he gave to Priya (as Lovely) and Pihu's star necklace they made together.

Ram asks Adi to call the cops when suddenly Krish comes in front of all of them and says why is Ram caring so much for his wife and his daughter.

Ram's light grey-blue eyes glint with anger as he holds Krish's collar and screams that Priya is HIS wife and Pihu is HIS daughter.

Everyone gets shocked as the revelation dawns on Ram and he apologizes to everyone and requests Krish to find Priya because she is pregnant.

Sarah gets stunned that Ram knows everything and Priya enters.

Pihu runs toward Ram who hugs her tightly as Priya scolds him for acting concerned now when he gave an expensive necklace to Vedika.

She frowns and Ram justifies himself, almost on the verge of tears.

Ram looks as if he could cry and reminds Priya that Lovely and her mean the same.

Brinda takes Pihu with her as the rest of the group follows to give Ram and Priya some privacy.

They both sit hand in hand, as Priya rests her smiling face on Ram's shoulders, remembering each moment they have spent together.

© Copyright tellybest.com, 2022, 2023. All Rights Reserved. Unauthorized use and/or duplication of any material from tellybest.com without written permission is strictly prohibited.
Cached Saved on: Wednesday 25th of January 2023 01:59:56 PMCached Disp on: Tuesday 31st of January 2023 07:07:54 PM