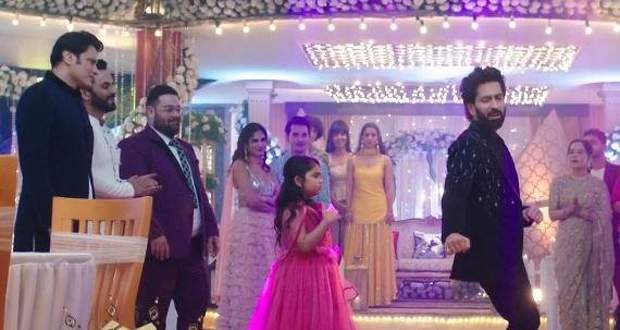 Immediately after Nandini questions, Vedika asks how Ram got to know about the threat.

Nandini warns Vedika to keep her actions in check and asks her to go to Meerut to keep an eye on Ishaan.

Meanwhile, Pihu asks Sandy if Ram is Priya's prince charming. Sandy gets tongue-tied and tells Pihu that Ram is very sweet while Pihu says she wants Krish to be the prince charming.

Further, Priya informs Pihu about the Sangeet ceremony to be held in the Meerut, listening to which Pihu gets very excited.

Pihu argues with Ram while Priya asks the two to keep calm and gives them glasses of water to cool down.

Both Ram and Pihu resonate together again if the water is filtered which makes Pihu say that Ram is copying her.

Priya mentions to Pihu about Ram being a good dancer at which Pihu giggles cutely and calls Ram 'Gappu'.

Pihu asks Ram to apologize to Krish if he wants her to be his dance partner.

At the same time, Ram receives a call from Pallavi, head chef of Amma's kitchen.

Pallavi, Priya, and Pihu mingle with each other and Priya mentions Pallavi helping her at a crucial time which makes Ram curious.

After the call disconnects, Pallavi discusses the menu of the party with her team and finalizes it without Nik's approval.

Lalita, and Manna side with Pallavi while Badal, and Shanky side with Nik.

At the same time, Ram comes there as a tie-breaker and gives his vote to Pallavi.

Further, Vikrant-Sarah, the entire Sood family, Ishaan, Aditya, Brinda, and the Kapoor family reach the venue of the ceremony.

Nikhil greets Priya when she arrives at the venue while Pallavi caters to Ram at the restaurant.

As Priya and Nikhil converse, Sandy comes and tells Priya that Pihu has denied dancing with Ram.

Nikhil gives Priya a life tip that is to away from the problems that are not being solved. Going away may help solve them.

At the same moment, Priya realizes that if she denies dancing with Ram for some reason then Pihu will have to keep the promise.

Both run to see Priya and find her in pain as she has hurt her foot with the flower vase.

As Ram tends to Priya, she asks Pihu to dance with Ram, and understanding dawns upon Ram.

On the other hand, Shubham and Vedika are planning to spike Ishaan's drink to get the secret out of him.

Later, Priya and Pihu come down dressed up for the party.

Pihu states that Ram has to dance with her to her favorite song.

When Ram asks Pihu her favorite song, she says that Ram should know it as he is the father.

© Copyright tellybest.com, 2022, 2023. All Rights Reserved. Unauthorized use and/or duplication of any material from tellybest.com without written permission is strictly prohibited.
Cached Saved on: Monday 21st of November 2022 07:29:10 AMCached Disp on: Saturday 3rd of December 2022 01:36:46 PM