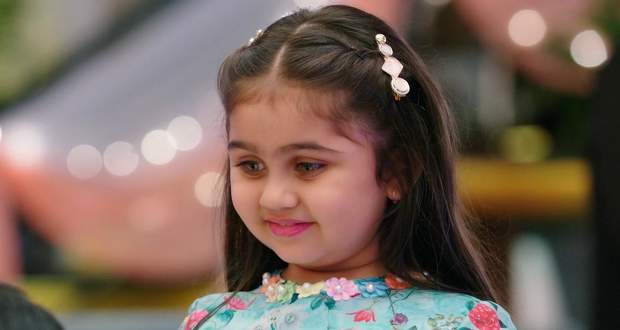 Today's Bade Ache Lagte Hain 2 21st June 2022 episode starts with Ram aggravatingly thinking while Vedika scolds Ishaan for flipping his side all of a sudden at the party.

Ishaan denies answering back when Vedika demands the name of the person who changed his mind.

Exiting Ishaan's room, Vedika collides with Pihu and calls her 'Chor Ki Bacchi' for which Pihu argues with her.

Meanwhile, Ram asks Aditya to check the CCTV footage to see if Ishaan left during the party.

At the same time, Pihu collides with Ram which aggravates him as he has realized Pihu had acted only to have an asthma attack in the mall.

Brinda chides Ram for breaking his promise when Pihu narrates everybody the mall scene.

On the other hand, Ishaan informs Priya that Vedika had handover him the papers saying Ram had sent them for him.

Krish calms down Priya as she starts getting frantic about the whole situation and blames herself for being the cause of it.

Meanwhile, Pihu bids farewell to Ram, calling him 'Mr. Khadoos' which makes Brinda like her while Vedika dislikes her.

Priya says that she will go at that time when nobody is there in the office.

Ram talks to Ishaan about the party telling him that he isn't upset with him but asks why he changed his decision.

Meanwhile, Vikrant feels guilty for hiding Pihu's truth from Ram and that they should tell him the truth.

Meera supports Vikrant saying that she felt the same when Maitri had told her about the incident in the mall.

Meera strongly feels God wants to reunite Priya and Ram and they should try helping it happen.

Vikrant agrees with Meera while Meera tries convincing Sarah to help as well.

On the other hand, Ishaan rethinks Priya's words of not disclosing her name to anyone, however, Ram catches it.

Ishaan says that he didn't meet Priya and he did all of this because he loves Sarah and when you love somebody you do this only.

© Copyright tellybest.com, 2022, 2023. All Rights Reserved. Unauthorized use and/or duplication of any material from tellybest.com without written permission is strictly prohibited.
Cached Saved on: Monday 21st of November 2022 04:43:48 AMCached Disp on: Friday 9th of December 2022 05:35:15 PM