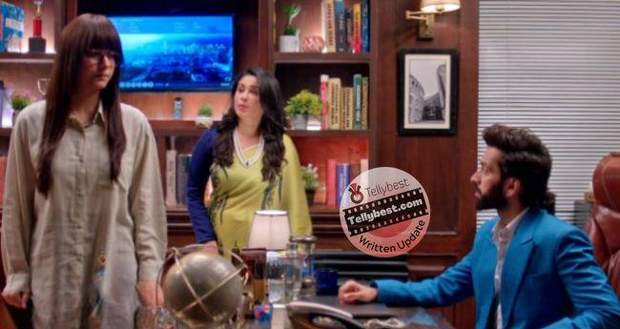 Today's Bade Ache Lagte Hain 2 21st November 2022 episode starts with Vedika meeting Lovely and asking her how she approached Ram for the job as it was Vedika’s duty to find a PA for Ram.

Lovely acts as if she has an allergy and wears the mask immediately to hide her face.

Aditya asks Vedika to stop complaining as she was not there at the time needed and did not fulfill her responsibility within the given time.

Vedika asks Lovely to make her a coffee but Lovely says that she accepts orders from Ram only and walks off.

While presenting the project to the client, the client asks Shubham if he has a partner with him.

Ram answers that Shubham has a partner named Sid but is a silent associate who will not make any presence.

Just then, Sid walks into that room and announces that he would like to be active in the project the attend the meetings.

Seeing Sid, Vedika gets scared out of her wits as Sid knows the truth about Sashi being in jail and can reveal it to Ram at any point.

Vedika gets hyperactive and asks everyone who called Sid there with a shocked face.

Sid says that he received an email from Ram’s secretary asking if he wants to attend the meeting as a business partner.

Hearing that, Nandini storms out of the meeting room and confronts Lovely about mailing Sid.

Nandini tells Ram that Lovely’s actions have caused immense pain to Vedika as she is not ready to face Sid yet after her divorce.

Ram tells Lovely that her mail caused immense problems for everyone while Lovely replies that she did not know about Vedika’s history with Sid.

Ram gets silent as he realizes that Lovely was just doing her work and does not know about the personal relationships.

Sid talks with Shubham and assures him that he will not reveal anything about Sashi to Ram as he has nothing to do with his brother.

Sid asks Shubham to mutually support each other as they want to advantage of Ram.

Later, Nandini asks Lovely to leave the office as she is fired but Lovely says that only Ram can fire her.

Aditya comes and distracts Nandini for the moment while Ram announces that he will take the decision regarding Lovely.

After Nandini leaves, Lovely says that she feels sympathetic toward Vedika as a woman and thinks that she deserves a break from everything after going through such stress.