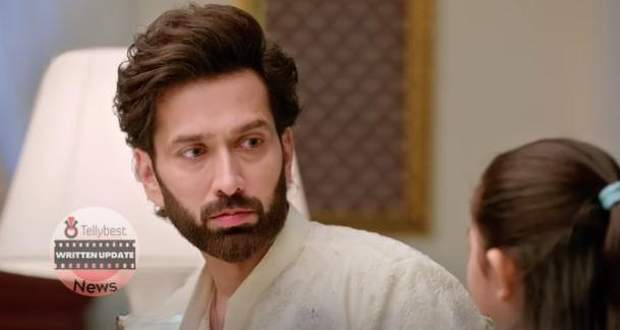 Today's Bade Ache Lagte Hain 2 21st September 2022 episode starts with Ram and Pihu bantering over who is the liar.

Pihu states Ram is a liar as he lied about the apple juice.

Meanwhile, Priya wakes up all of a sudden when a shooting star passes by them in the night.

Pihu makes a wish to the star, saying she wants Ms. Sood and Mr. Khadoos together if it is possible.

Ram gets emotional seeing both his girls get so excited while Priya tells Ram that Pihu likes stars and she has a favorite rockstar but Pihu covers Priya’s mouth.

After Priya dozes off, Ram makes star cutouts with Pihu and asks her who is her rockstar.

Ram then shyly tells Pihu she is his rockstar while Pihu says her rockstar is her father but she doesn’t know him.

However, Pihu further states that Mr. Kapoor seems like her rockstar.

On the other hand, Shubham and Nandini get confused when they see Ram, Priya, and Pihu having fun, unlike the plan they made.

In the morning, Nandini interrogates Vedika about how did she fall since she had to kidnap Pihu.

Meanwhile, Priya wakes up in a confused state and remembers hitting someone last night.

Later in the afternoon, Nandini asks Ram to sit while Ram complains about having a neckache.

Ram says Pihu sleeps in awkward positions and she hit him while changing postures.

Ram further tells Nandini that Pihu accidentally gave alcohol to Priya and they all slept on the terrace.

Pihu apologizes and says she shouldn’t have hit Ms. Sood while Priya cringes after realizing she drank.

Later, Priya sees Ram holding an ice pack to his neck and volunteers to apply the spray.

Both the lovers get silent while Ram slowly expresses that he got closer to Pihu last night.

Priya gets happy while Ram inwardly gets excited, saying that this is the new beginning of their love story.

In the afternoon, Nandini pretends to laugh at security footage to get Ram’s attention while Ram gets shocked to see the footage of the day when Priya was about to escape with Pihu.