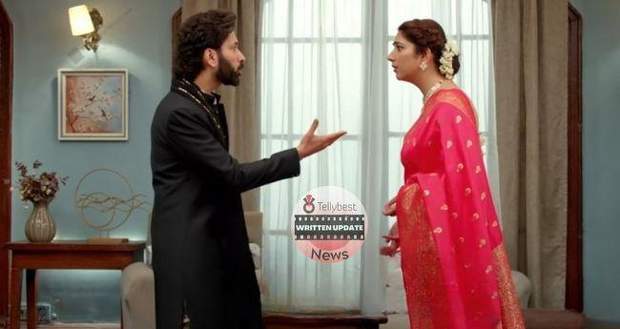 Today's Bade Ache Lagte Hain 2 22nd August 2022 episode starts with Ram asking Priya why she is threatening his family like that.

Priya denies doing so and tries to explain to Ram that they were the ones who were threatening her but Shubham and Vedika interrupt her.

Acting like Priya was demanding money instead of her help, Shubham requests Priya not to terrify them in such a manner.

Ram believes in Shubham and Vedika’s lies and walks out of the room in anger.

As the wedding was about to start, Ram thinks about talking with Priya once but then stops as he sees Krish beside her.

Sarah and Vikrant’s wedding starts and the ritual of kanyadaan comes in the queue that is to be done by Ram and Priya.

Bringing Ram and Priya together, Pihu intertwines their hands together and says that doing kanyadaan will bless them.

Priya and Ram hold each other’s hands along with Sarah and Vikrant’s hands over them.

Seeing Ram and Priya close to each other, Nandini asks Shubham to do something but Shubham tells her to endure it for that day.

While passing the sindoor, it falls on Priya’s hairline by Ram, and both lock eyes with each other.

As the marriage gets completed, everyone in the family takes a family photo altogether after which Ram comes to his room.

Priya enters the room after Ram and says that she needs to talk with him regarding something.

Ram asks Priya why she is behaving in such a way with his family and what her demands are.

Losing her cool, Priya says that it is very hard for her as she has Pihu to protect while getting threatened by Ram’s family.

Ram assures Priya that he will take care of Pihu but Priya does not believe his words.

Reminding Priya that she was the one who pushed Shivina 5 years ago, Ram implies how his family is still dealing with the grief.

Priya says that it was an accident and she also regrets the loss of Shivina wholeheartedly.

Referring to Priya’s false accusation of Nandini, Ram calls Priya a liar which Pihu hears and gets angry.

Pihu says that Priya never lies and Ram should apologize to Priya for calling her a liar.

© Copyright tellybest.com, 2020, 2021. All Rights Reserved. Unauthorized use and/or duplication of any material from tellybest.com without written permission is strictly prohibited.
Cached Saved on: Saturday 1st of October 2022 11:31:08 PM