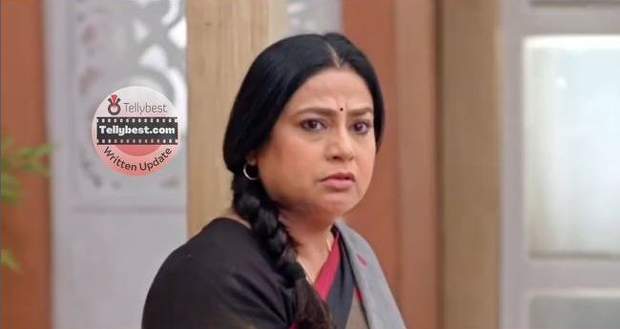 Ram kisses her forehead while Priya says this is the most peaceful she has felt in a long while.

Ram apologizes for forgetting her and Pihu, making Priya jokingly say that she wants lifetime coupons for him to not get mad at her for the hard work she has done as Lovely.

Ram looks at Priya softly and whispers that everything is hers only while he feels bad for Pihu at the same time.

Priya tells him that Pihu is a fighter and Ram beams and puts his hand across Priya's stomach, saying now she cannot stop him or Pihu to spoil the little junior growing inside.

Priya also suggests an idea for Nandini to spill everything out.

At Kapoor House, Nandini gets shocked when she sees Ram and Priya enter together with marriage garlands around their necks.

Ram apologizes to Nandini for taking a hurried decision but reveals that he has married Lovely and wants to start his life afresh.

Vedika's face falls and Nandini thinks whether this is another trick of Priya or not.

Standing face-to-face, Nandini starts her emotional drama by telling Ram that he didn't need to hide his love for Lovely because she never said no to anything he wanted.

However, Ram in an equally emotional voice replies to her that he thought she hated Lovely but Nandini reminds her that she loves HIM though.

The memory of Nandini confessing to Priya that she doesn't love Ram but his money runs through his head and he holds back the tears.

Vedika jumps into the conversation, saying it is Ram who has done wrong to her and did not even think about his mother or Shubhu.

Nandini then takes Shivina's name and asks Ram what will he say to her when she returns from Boston, knowing that Ram has started to treat them as step-family members.

Ram asks Nandini to stop taking Shivina's name as he says her tongue is not even slurring while taking her name.

Nandini doesn't stop until Ram steps forward, and says Shivina was her baby sister with tears in his eyes.

He then screams at Nandini, saying if she loved her, why is she making a drama out of her death?

Nandini gets shocked as Ram says he remembers everything now and she cannot manipulate him any longer.

Shubham stand shell-shocked as Vedika tries to think of ways to save her image in front of Ram.

Ram cries as he remembers Shivina and covers her face while Priya comforts him.

Vedika blames Nandini for everything but Ram reminds her that she is in the wrong too.

However, Aditya & Sid come to Kapoor Mansion at the same time and shows Ram the footage of Vedika threatening Pihu, and Shubham tells Ram he knew about it and told Nandini not to do this.

Priya asks all of them to step and puts her hand on Ram's shoulder, saying they should talk about what just happened before his accident than everything else in the last few days.