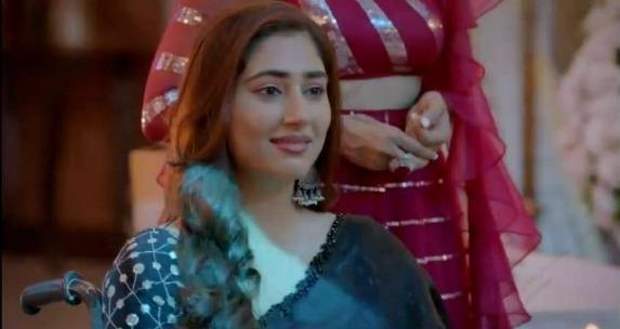 Today's Bade Ache Lagte Hain 2 22nd July 2022 episode starts with Nikhil acting drunk with Vishal so he spills out whatever he has done with Pallavi.

While drinking alcohol, Vishal says he got offended when Pallavi told him no and admits that he was the one to call the office staff.

Taking Vishal to the party downstairs, Nikhil beats Vishal in front of everyone.

Nikhil had already told Ram to install a camera in the room so Vishal’s admittance could get recorded.

Everyone gets shocked while Nikhil beats up Vishal and asks him to seek Pallavi’s forgiveness.

Meera comes with a glass of turmeric milk for Priya and asks her to drink it.

However, Priya says her leg does not hurt as her heart does.

Meera gets emotional and takes all the blame for Priya and Ram’s separation.

However, Meera also advises Priya to let Pihu spend some alone time with Ram and asks Priya to call Brinda to make it happen.

Later, Brinda informs both Ram and Pihu that Priya is going to a hospital for her leg’s check-up leaving Pihu under Ram’s care.

Both the estranged father and daughter ask a lot of questions to Brinda, saying how could Priya leave Pihu just like this.

Just then, Priya videocalls Pihu and asks her to behave well with Ram.

However, Ram scolds Priya for prioritizing her interview over her health.

When Pihu is not able to pinkie-promise Priya through the screen, Ram makes a pinkie promise to Pihu with his little finger.

Meanwhile, Vedika panics alone in her room as she does not want Ram to know about Shivi’s death and decides to ask Shubham for help.

On the other hand, Sandy leaves Pihu alone with Ram while he thinks about how to start a conversation with her.

Pihu asks what is Ram doing and he says he is writing her name as Pihu Khadoos for the boarding pass.

However, Pihu is quick to tell Ram that her name is Pihu Sood making Ram curious why Priya let Pihu take her surname and not Krish’s.

© Copyright tellybest.com, 2022, 2023. All Rights Reserved. Unauthorized use and/or duplication of any material from tellybest.com without written permission is strictly prohibited.
Cached Saved on: Monday 21st of November 2022 05:55:46 PMCached Disp on: Thursday 8th of December 2022 02:47:21 AM