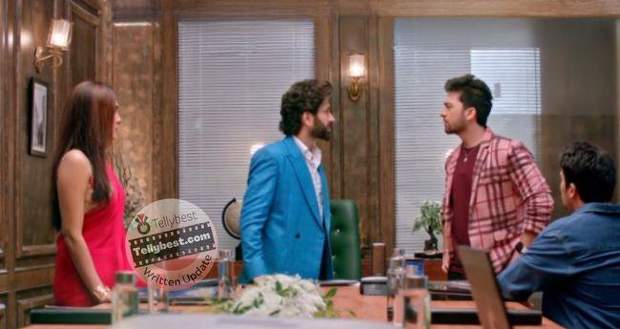 Today's Bade Ache Lagte Hain 2 22nd November 2022 episode starts with Nandini asking Shubham & Vedika to not fight with each other as they need to work as a trio.

Vedika flaunts receiving a message from Ram where he asks her to come for dinner at Kapoor Mansion.

At night, Vedika tells Nandini that she is Ram's favorite and Nandini gets irritated.

She asks Vedika to stay grounded on the Earth, otherwise, the fall will be harmful.

When Ram arrives for dinner, Shubham suggests Vedika hire a new PA for Ram while Ram worries about what Lovely will do professionally.

Krish then informs Priya about meeting Vedika at the florist shop.

At Kapoor Mansion, Ram asks Vedika to take a break along with Nandini & hands them tickets to Shimla.

Nandini begins to cough on her food while Shubham covers his face with a handkerchief.

At Sood House, Priya reveals she is the one who convinced Ram to send Nandini & Vedika to Shimla.

However, since he accepted her resignation, she thinks she is fired.

On the other hand, Aditya gets a call from Ram as he drinks beer with Vikrant.

Aditya pretends to be sleepy and cuts Ram's call immediately when he asks about Lovely.

Revealing that Lovely could be Priya, both Aditya & Vikrant get happy at the prospect of seeing RaYa union shortly.

He then asks Vicky to call Sarah here so Ram and Priya can get alone time at Sood House.

Before going to bed, Pihu prays to her favorite Gannu Ji and hears the doorbell ring.

Upon seeing Ram, Pihu gets surprised while Priya gets alert.

She signals Pihu to distract Ram and Pihu engages him in banter, stating that adults are not allowed to come this late.

He then asks her where her mother is and states that her father is bad for leaving her alone at home.

Pihu rebukes Ram and tells him that her father is a Superstar.

On the other hand, Sarah scolds Aditya & Vikrant for sending Ram to Sood House as Priya's cover can blow up as she does not parade all day long as Lovely.

Meanwhile, Priya appears as Lovely, wearing the wig while Ram gets surprised, asking if this little girl is Lovely's daughter.

Lovely appears to be grim and says yes.

He asks Pihu to sit down as she serves him a glass of water.

Before gulping it, Ram looks at Lovely while she tells him that the water is filtered.

Astonished, Ram asks Lovely how come she knew that he was going to ask this.

© Copyright tellybest.com, 2022, 2023. All Rights Reserved. Unauthorized use and/or duplication of any material from tellybest.com without written permission is strictly prohibited.
Cached Saved on: Tuesday 22nd of November 2022 09:26:30 PMCached Disp on: Saturday 10th of December 2022 01:41:46 PM