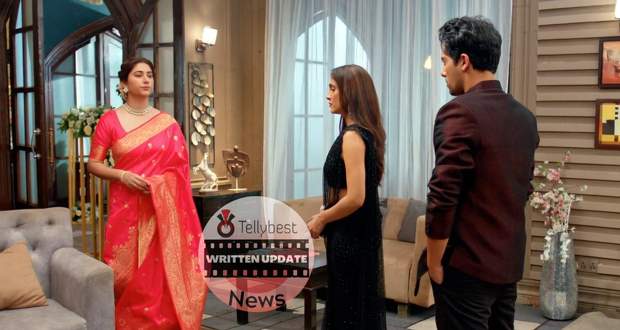 Today's Bade Ache Lagte Hain 2 23rd August 2022 episode starts with Ram asking Pihu to stay out of their talk as she asks him to apologize to Priya.

Seeing Ram behaving a bit rudely, Priya tells him to talk softly with Pihu as she is just a kid defending her mother.

Ram says that Priya is spoiling Pihu by letting her whims take the best of her when suddenly Maitri screams in pain at the door.

Maitri says that she is feeling extremely uncomfortable and wants to go to Neeraj as soon as possible.

As letting Maitri travel by herself would be dangerous for her, Ram and Priya accompany her to leave her house.

Before leaving, Priya insists that Pihu cooperates during the interview but Pihu says no to her.

Ram and Priya rush outside with their car along with Maitri so that they can reach a safe place before it gets too late.

During their drive, Ram tries to crack jokes and make the atmosphere pleasant so that Maitri does not get stressed about her condition.

However, suddenly the car engine stops and three of them get stuck in the middle of the road.

Meanwhile, Aditya overhears Brinda’s conversation with the doctor regarding DNA reports and thinks that she is going to die soon.

After everyone fails to find Ram and Priya in the house, Vikrant and Sarah call them and get shocked to know about Maitri.

Ishaan suggests they go to a nearby warehouse that is close to their location.

The reporters inquire with questions about the interview while Kanika tries to instigate them by saying that Ram and Priya were fighting.

However, Pihu acts like an ideal daughter in front of everyone which crashes Vedika and Kanika’s plan.

Vedika suggests that Pihu should give the interview to which Sarah and Sandy show objection.

Nandini says that Pihu will be accompanied by her maternal and paternal grandmothers so everything will be under control.

On the other hand, Ram and Priya lay Maitri in the boxing arena and begin to search for towels, scissors, gloves, etc.

Ram finds some things in his car and brings them to Priya while he asks her if she has experience with deliveries.

Priya replies that she has given birth to Pihu which was in the same way so things should not be that much of a problem.

© Copyright tellybest.com, 2020, 2021. All Rights Reserved. Unauthorized use and/or duplication of any material from tellybest.com without written permission is strictly prohibited.
Cached Saved on: Friday 30th of September 2022 06:38:52 PMCached Disp on: Saturday 1st of October 2022 12:51:34 AM