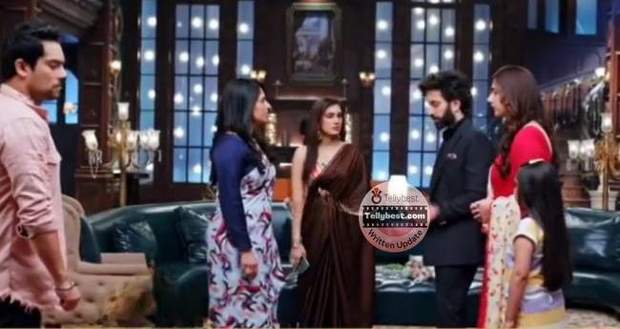 Today's Bade Ache Lagte Hain 2 23rd December 2022 episode starts with Priya telling Ram that they have to talk about what was left after his accident.

Priya tells Ram that she doesn't need his money, not before or now, and is ready to leave the house.

Shubham like a dark house grabs the opportunity and pretends to be the concerned brother-in-law with fake tears in his eyes, urging Priya not to go.

Just then, Aditya, Vikrant, & Sarah enters the Kapoor Mansion and get surprised to see Ram's memories are back.

Aditya squeals at Ram, asking "Are you serious?" and Ram nods with a smile.

Ram then turns to Shubhu and tells him not to say that Priya married him for money because this was needed to make the truth come out in front of everyone.

The instrumental tune of Bade Acche Lagte Hain song plays in the background as Nandini decides to leave but is stopped by Ram who says he cannot be the son who will leave his mother to be ill-treated by the harshness of the streets.

He says all this while having his back turned on Nandini and utters if Nandini Kapoor hasn't heard this, Priya can tell her.

Nandini stops and leaves the hall while Ram looks away purposefully.

He then reveals that he is going to marry Priya again and the wedding will be planned by Junior Sood, AKA, Pihu.

Priya asks Ram if he is sure and Ram replies to her that he has never been so sure.

Ram then laughingly asks Vikrant to make RaYa's wedding superb and Vikrant replies, stating he will make it the wedding of the century as he was never this happier on his wedding day!

Sarah frows and then later laughs.

The group of these crazy people then go to Sood House to seek Meera's blessings where an angry Brinda confronts Ram, stating he played solo this time.

Ram teasingly says that if they all get angry with him, his memory will go away now & seeks Vicky's help.

Vicky says that Ram loves him more and to this, Brinda throws a cushion at him until Meera Ma comes to stop their fight, holding a cauliflower in her hand.

She threatens everyone that they won't get any food, taking Ram's side.

Ram light-heartedly says that his mother understands him more but suddenly gets reminded of his Nandini Ma's betrayal and his Swati Ma's absence.

Turning towards Priya and putting his hand on her pregnant belly, Ram cheekily says that Priya is the only reason for him to move further and these happy times are the testimony of a life that he loves Bade Acche Lagte Hai.

Meanwhile, tears stream down Swati's face as she remembers Ram.

Veena (Yash's wife) sees Swati crying and reminds her that Lakhan is coming back.

After Veena leaves, asking Swati to rest, Swati speaks that she is not crying remembering Lakhan, but Ram.

Swati then reveals that Lakhan is Ram's brother who was in her stomach when she had to leave Ram.

On the other hand, RaYa is standing on the balcony at night, and Ram thanks Priya for being there for him always and says she looks the same as she looked on Diwali night.

In the flashback of Diwali night, Priya is shown decorating the Lover's cafe with candles to brighten Ram's dull mood.

They both stand closely and Priya asks Ram to promise that he will never leave her.

Ram smiles, repeating Priya and adding that he is going to be with her forever and ever, and proceeds to kiss her fingertips.

She turns her back on him and he swipes her hair away to get access to her bare nape & starts planting kisses on it.

Making Priya face him, Ram nudges his pink nose against hers, as Priya's cheek flush.

They both kiss and the flashback ends. Currently, Ram tells Priya that he was helpless to pretend he forgot her to protect her and their kids.

Priya says it wasn't that bad while Ram gets in awe of her optimistic nature.

She then strokes her stomach and speaks to their baby, saying that Mumma wants it to be like Ram, good and truthful, someone who loves and cares for everyone.